Churchill Methodist Church, in the village of Churchill, North Somerset, is a Grade II listed Methodist church on the Somerset Mendip Methodist Circuit. Designed by Foster & Wood, Bristol, of Perpendicular Gothic style, the church opened on 2 May 1881. The schoolroom and coach house, of Elizabethan architecture, were erected before the new church, and opened on 1 June 1879 (Whitsun). Sidney Hill, a wealthy local businessman and benefactor, erected the church and schoolroom as a memorial to his wife.

The Reverend Meg Slingo (Margaret C. M. Slingo) is the incumbent minister for Churchill. The Anglican and Methodist churches work together in many areas, particularly activities that involve children and initiatives in the parish schools. The schoolroom is now used as a hall and is run by a charity. The hall has a newly refitted kitchen and smaller rooms making it useful for community activities.

Methodists in Churchill would meet at a private home (society meetings), until the autumn of 1835, when the first chapel was opened. William Baker was a trustee of the chapel by the time the Churchill tithe map had been constructed in 1843. This chapel was demolished in 1880 so that Sidney Hill could erect a new Wesleyan church on adjacent land gifted by William Bobbett. Sidney Hill had married his wife, Mary Ann Bobbett, at the old chapel on 15 June 1864, and erected the new church as a memorial to her after her early death on 7 December 1874(1874-12-07) (aged 35). The new church was designed by Foster and Wood of Bristol in Perpendicular Gothic style, and erected by William Veals, master builder of Bristol, at a cost of £3,300. Hill would engage the same firm of architects in 1897 to design the nearby clock tower. The church opened on 2 May 1881 (141 years ago) (1881-05-02) with a dedication and sacramental service commencing at 2:00 pm.

The schoolroom and coach house, of Elizabethan architecture, were erected before the new church, and opened on Whitsun, 1 June 1879 (143 years ago) (1879-06-01). These buildings cost £1,300 to build and the schoolroom was later linked to the new church by a cloister. Hill also vested in trustees money to provide an income for the maintenance of the chapel and schoolroom. In 1898, Sidney Hill funded the addition of a porch that was designed by Foster and Wood and built by Henry Rose of Churchill.

In 1906, Sidney Hill gifted land at the back of the church for a burial ground extension. The ground was consecrated in June of that year. The church closed in August 1924 so that the organ could be refurbished and four stops added. The opportunity was also taken to provide better accommodation for the choir. Services were held in the schoolroom until the church was reopened on 27 November 1924 with a service held in the afternoon. On 1 September 1933, the Methodist circuits of Draycott, Cheddar, Congresbury and Palmer's Green, were united to form one circuit, under the name of the Cheddar Valley Methodist Circuit. 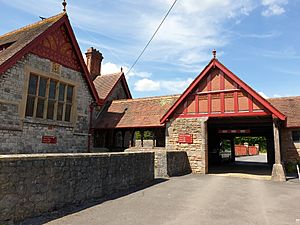 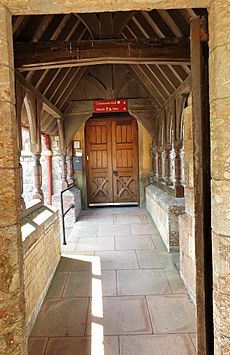 The church consists of a chancel, nave chancel, and two transepts, with a gallery at one end facing the pulpit. There is a staircase turret with pyramidal cap to the north east for access to the gallery. An organ is installed in the eastern transept. It cased with freestone, and has an arched pitch pine ceiling, divided into panels by moulded ribs, bearing on attached stone shafts. At the extreme end of the chancel, immediately above the communion table, there is memorial window by Clayton and Bell, representing Dorcas amidst the people that she helped, in her illness, in her death, and resurrection. Immediately beneath the memorial window, and extending the whole length of communion platform, there is brass plate with the following inscription:

This building was erected in the year of our Lord 1880, by Sidney Hill, Esq., of Langford-house, to the glory of God, and in memory of the life and labours (in this parish, and at Port Elizabeth, South Africa), of his beloved wife, Mary Ann, who was born in Bristol, March 6th, 1839, and died at Bournemouth, Dec. 7th, 1874.

In April 1894, Sidney Hill gifted four stained glass windows to the church. The windows were made by Joseph Bell and Sons, of College Green, Bristol, and represent:

The first three subjects are installed in windows on one side of the building, and Lord blessing little children is installed in the transept. Each subject is arranged to occupy three panels formed by canopy work and casements. Lord blessing little children follows the same arrangement but angels are displayed in the stone work of the tracery. Each of the windows has a scriptural text at the foot of the lights. 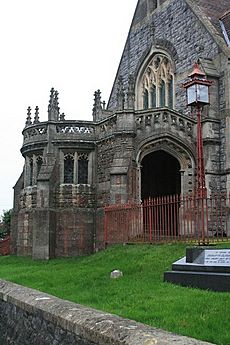 Porch at the front of Churchill Methodist church

The porch was built in Perpendicular Gothic style, with Rowberrow stone and Doulting freestone dressings. The side doors are made of teak, the roof of pitch pine, with encaustic floor tiles. The stained glass windows were made by James Bell and Son, College Green, Bristol, and represent:

On each sole of the church entrance is a pedestal brought from Bethlehem and Jerusalem, the gift of William Sidney Adams, of South Africa, that held lamps when the porch was first opened. A large number of Wesleyans from all parts of the Circuit attended the opening ceremony on 26 October 1898.

From January 1902, further stained glass windows were installed in the schoolroom. The first window to be installed was Suffer little children to come unto me, displayed in three windows, and with the text displayed at the foot of the middle window. The windows were funded by Sidney Hill and designed by James Paxton Brown Young of Horfield, Bristol. Young was a former employee of Joseph Bell and Sons, and at that time, was the figure glass painting artist for the stained glass in the chapel. Young formulated designs for a number of other windows in the school:

The Reverend Meg (Margaret C. M. Slingo) is the incumbent minister covering Churchill. She was a former minister of Salem Methodist Church, Cheslyn Hay, Staffordshire, before being inducted to the Somerset Mendip Methodist circuit on the 30 August 2019 in a ceremony at Wells Methodist church.

All content from Kiddle encyclopedia articles (including the article images and facts) can be freely used under Attribution-ShareAlike license, unless stated otherwise. Cite this article:
Churchill Methodist Church Facts for Kids. Kiddle Encyclopedia.