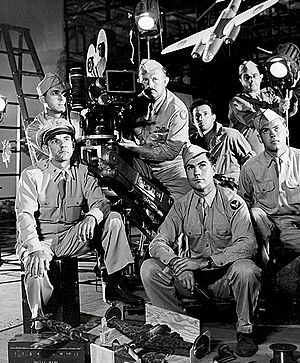 A camera crew from the First Motion Picture Unit

Cinematography (from Greek: κίνημα, kinema "movements" and γράφειν, graphein "to record") is the art or science of motion picture photography. It is the technique of movie photography, including both the shooting and development of the film. The cinematographer could also be referred to as the film director's main visual collaborator.

The ASC defines cinematography as:

a creative and interpretive process that culminates in the authorship of an original work of art rather than the simple recording of a physical event. Cinematography is not a subcategory of photography. Rather, photography is but one craft that the cinematographer uses in addition to other physical, organizational, managerial, interpretive and image-manipulating techniques to effect one coherent process.

Muybridge sequence of a horse galloping

In the 1830s, three different solutions for moving images were invented on the concept of revolving drums and disks, the stroboscope by Simon von Stampfer in Austria, the phenakistoscope by Joseph Plateau in Belgium, and the zoetrope by William Horner in Britain.

In 1845, Francis Ronalds invented the first successful camera able to make continuous recordings of the varying indications of meteorological and geomagnetic instruments over time. The cameras were supplied to numerous observatories around the world and some remained in use until well into the 20th century.

William Lincoln patented a device, in 1867, that showed animated pictures called the "wheel of life" or "zoopraxiscope". In it, moving drawings or photographs were watched through a slit.

On 19 June 1878, Eadweard Muybridge successfully photographed a horse named "Sallie Gardner" in fast motion using a series of 24 stereoscopic cameras. The cameras were arranged along a track parallel to the horse's, and each camera shutter was controlled by a trip wire triggered by the horse's hooves. They were 21 inches apart to cover the 20 feet taken by the horse stride, taking pictures at one-thousandth of a second. At the end of the decade, Muybridge had adapted sequences of his photographs to a zoopraxiscope for short, primitive projected "movies," which were sensations on his lecture tours by 1879 or 1880.

Four years later, in 1882, French scientist Étienne-Jules Marey invented a chronophotographic gun, which was capable of taking 12 consecutive frames a second, recording all the frames of the same picture.

The late nineteenth to the early twentieth century brought rise to the use of film not only for entertainment purposes but for scientific exploration as well. French biologist and filmmaker Jean Painleve lobbied heavily for the use of film in the scientific field, as the new medium was more efficient in capturing and documenting the behavior, movement, and environment of microorganisms, cells, and bacteria, than the naked eye. The introduction of film into scientific fields allowed for not only the viewing "new images and objects, such as cells and natural objects, but also the viewing of them in real time", whereas prior to the invention of moving pictures, scientists and doctors alike had to rely on hand-drawn sketches of human anatomy and its microorganisms. This posed a great inconvenience in the science and medical worlds. The development of film and increased usage of cameras allowed doctors and scientists to grasp a better understanding and knowledge of their projects.

The experimental film Roundhay Garden Scene, filmed by Louis Le Prince on October 14, 1888 in Roundhay, Leeds, England, is the earliest surviving motion picture. This movie was shot on paper film.

An experimental film camera was developed by British inventor William Friese Greene and patented in 1889. W. K. L. Dickson, working under the direction of Thomas Alva Edison, was the first to design a successful apparatus, the Kinetograph, patented in 1891. This camera took a series of instantaneous photographs on standard Eastman Kodak photographic emulsion coated onto a transparent celluloid strip 35 mm wide. The results of this work were first shown in public in 1893, using the viewing apparatus also designed by Dickson, the Kinetoscope. Contained within a large box, only one person at a time looking into it through a peephole could view the movie.

In the following year, Charles Francis Jenkins and his projector, the Phantoscope, made a successful audience viewing while Louis and Auguste Lumière perfected the Cinématographe, an apparatus that took, printed, and projected film, in Paris in December 1895. The Lumière brothers were the first to present projected, moving, photographic, pictures to a paying audience of more than one person.

In 1896, movie theaters were open in France (Paris, Lyon, Bordeaux, Nice, Marseille); Italy (Rome, Milan, Naples, Genoa, Venice, Bologna, Forlì); Brussels; and London. The chronological improvements in the medium may be listed concisely. In 1896, Edison showed his improved Vitascope projector, the first commercially successful projector in the U.S. Cooper Hewitt invented mercury lamps which made it practical to shoot films indoors without sunlight in 1905. The first animated cartoon was produced in 1906. Credits began to appear at the beginning of motion pictures in 1911. The Bell and Howell 2709 movie camera invented in 1915 allowed directors to make close-ups without physically moving the camera. By the late 1920s, most of the movies produced were sound films. Wide screen formats were first experimented with in the 1950s. By the 1970s, most movies were color films. IMAX and other 70mm formats gained popularity. Wide distribution of films became commonplace, setting the ground for "blockbusters." Film cinematography dominated the motion picture industry from its inception until the 2010s when digital cinematography became dominant. Film cinematography is still used by some directors, especially in specific applications or out of fondness of the format.

From its birth in the 1880s, movies were predominantly monochrome. Contrary to popular belief, monochrome does not always mean black and white; it means a movie shot in a single tone or color. Since the cost of tinted film bases was substantially higher, most movies were produced in black and white monochrome. Even with the advent of early color experiments, the greater expense of color meant films were mostly made in black and white until the 1950s, when cheaper color processes were introduced, and in some years the percentage of films shot on color film surpassed 51%. By the 1960s, color became by far the dominant film stock. In the coming decades, the usage of color film greatly increased while monochrome films became scarce.

After the advent of motion pictures, a tremendous amount of energy was invested in the production of photography in natural color. The invention of the talking picture further increased the demand for the use of color photography. However, in comparison to other technological advances of the time, the arrival of color photography was a relatively slow process.

Early movies were not actually color movies since they were shot monochrome and hand-colored or machine-colored afterwards. (Such movies are referred to as colored and not color.) The earliest such example is the hand-tinted Annabelle Serpentine Dance in 1895 by Edison Manufacturing Company. Machine-based tinting later became popular. Tinting continued until the advent of natural color cinematography in the 1910s. Many black and white movies have been colorized recently using digital tinting. This includes footage shot from both world wars, sporting events and political propaganda.

In 1902, Edward Raymond Turner produced the first films with a natural color process rather than using colorization techniques. In 1908, kinemacolor was introduced. In the same year, the short film A Visit to the Seaside became the first natural color movie to be publicly presented.

In the 2010s, color films were largely superseded by color digital cinematography.

In digital cinematography, the movie is shot on digital media such as flash storage, as well as distributed through a digital medium such as a hard drive.

The basis for digital cameras are metal-oxide-semiconductor (MOS) image sensors. The first practical semiconductor image sensor was the charge-coupled device (CCD), based on MOS capacitor technology. Following the commercialization of CCD sensors during the late 1970s to early 1980s, the entertainment industry slowly began transitioning to digital imaging and digital video over the next two decades. The CCD was followed by the CMOS active-pixel sensor (CMOS sensor), developed in the 1990s.

Beginning in the late 1980s, Sony began marketing the concept of "electronic cinematography," utilizing its analog Sony HDVS professional video cameras. The effort met with very little success. However, this led to one of the earliest digitally shot feature movies, Julia and Julia (1987). In 1998, with the introduction of HDCAM recorders and 1920×1080 pixel digital professional video cameras based on CCD technology, the idea, now re-branded as "digital cinematography," began to gain traction.

Shot and released in 1998, The Last Broadcast is believed by some to be the first feature-length video shot and edited entirely on consumer-level digital equipment. In May 1999, George Lucas challenged the supremacy of the movie-making medium of film for the first time by including footage filmed with high-definition digital cameras in Star Wars: Episode I – The Phantom Menace. In late 2013, Paramount became the first major studio to distribute movies to theaters in digital format, eliminating 35mm film entirely. Since then the demand of movies to be developed onto digital format rather than 35mm has increased drastically.

In the infancy of motion pictures, the cinematographer was usually also the director and the person physically handling the camera. As the art form and technology evolved, a separation between director and camera operator emerged. With the advent of artificial lighting and faster (more light sensitive) film stocks, in addition to technological advancements in optics, the technical aspects of cinematography necessitated a specialist in that area.

Cinematography was key during the silent movie era - no sound apart from background music, no dialogue - the films depended on lighting, acting and set.

In 1919, in Hollywood, the new motion picture capital of the world, one of the first (and still existing) trade societies was formed: the American Society of Cinematographers (ASC), which stood to recognize the cinematographer's contribution to the art and science of motion picture making.

Traditionally the term "cinematography" referred to working with motion-picture film emulsion, but it is now largely synonymous with videography and digital video due to the popularity of digital cinematography.

Modern digital image processing has also made it possible to radically modify pictures from how they were originally captured. This has allowed new disciplines to encroach on some of the choices that were once the cinematographer's exclusive domain.

All content from Kiddle encyclopedia articles (including the article images and facts) can be freely used under Attribution-ShareAlike license, unless stated otherwise. Cite this article:
Cinematography Facts for Kids. Kiddle Encyclopedia.