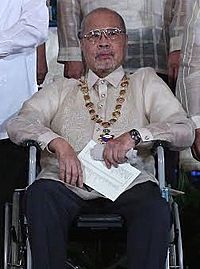 Cirilo F. Bautista (July 9, 1941 – May 6, 2018) was a Filipino poet, fictionist, critic and writer of nonfiction. He was awarded with the National Artist of the Philippines award in 2014. He was born in Manila.

Bautista works include Boneyard Breaking, Sugat ng Salita, The Archipelago, Telex Moon, Summer Suns, Charts, The Cave and Other Poems, Kirot ng Kataga, and Bullets and Roses: The Poetry of Amado V. Hernandez. His novel Galaw ng Asoge was published by the University of Santo Tomas Press in 2004.

Bautista died on May 6, 2018 in Manila of neuroendocrine cancer at the age of 76.

All content from Kiddle encyclopedia articles (including the article images and facts) can be freely used under Attribution-ShareAlike license, unless stated otherwise. Cite this article:
Cirilo Bautista Facts for Kids. Kiddle Encyclopedia.