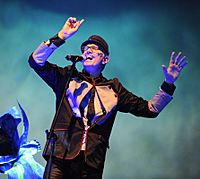 Ciro Pessoa Mendes Corrêa (June 12, 1957 – May 5, 2020), also known by his Dharma name Tenzin Chöpel, was a Brazilian singer-songwriter, guitarist, and poet. He was known as one of the founding members of the influential rock band Titãs and for his later work with post-punk/gothic rock band Cabine C. He was born in São Paulo, São Paulo.

All content from Kiddle encyclopedia articles (including the article images and facts) can be freely used under Attribution-ShareAlike license, unless stated otherwise. Cite this article:
Ciro Pessoa Facts for Kids. Kiddle Encyclopedia.