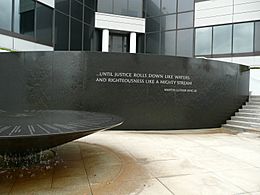 The Civil Rights Memorial is an American memorial in Montgomery, Alabama created by Maya Lin. The names of 41 people are inscribed on the granite fountain as martyrs who were killed in the civil rights movement. The memorial is sponsored by the Southern Poverty Law Center.

The names included in the memorial belong to those who were killed between 1954 and 1968. Those dates were chosen because in 1954 the U.S. Supreme Court ruled that racial segregation in schools was unlawful and 1968 is the year of the assassination of Martin Luther King Jr. The monument was created by Maya Lin, who is best known for creating the Vietnam Veterans Memorial in Washington, D.C. The Civil Rights Memorial was dedicated in 1989.

The concept of Lin's design is based on the soothing and healing effect of water. It was inspired by a passage from King's "I Have a Dream" speech "...we will not be satisfied "until justice rolls down like waters and righteousness like a mighty stream..." The quotation in the passage, which is inscribed on the memorial, is a direct paraphrase of Amos 5:24, as translated in the American Standard Version of the Bible. The memorial is a fountain in the form of an asymmetric inverted stone cone. A film of water flows over the base of the cone, which contains the 41 names included. It is possible to touch the smooth film of water and to alter it temporarily, which quickly returns to smoothness. As such, the memorial represents the aspirations of the civil rights movement to end legal racial segregation.

The memorial is in downtown Montgomery, at 400 Washington Avenue, in an open plaza in front of the Civil Rights Memorial Center, which was the offices of the Southern Poverty Law Center until it moved across the street into a new building in 2001. The memorial may be visited freely 24 hours a day, 7 days a week.

The memorial is only a few blocks from other historic sites, including the Dexter Avenue King Memorial Baptist Church, the Alabama State Capitol, the Alabama Department of Archives and History, the corners where Claudette Colvin and Rosa Parks boarded buses in 1955 on which they would later refuse to give up their seats, and the Rosa Parks Library and Museum.

The 41 names included in the Civil Rights Memorial are those of:

"The Forgotten" are 74 people who are identified in a display at the Civil Rights Memorial Center. These names were not inscribed on the Memorial because there was insufficient information about their deaths at the time the Memorial was created. However, it is thought that these people were killed as a result of racially motivated violence between 1952 and 1968.

All content from Kiddle encyclopedia articles (including the article images and facts) can be freely used under Attribution-ShareAlike license, unless stated otherwise. Cite this article:
Civil Rights Memorial Facts for Kids. Kiddle Encyclopedia.