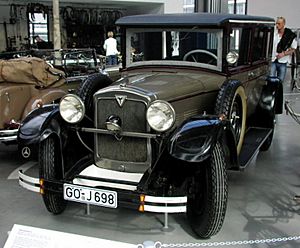 Adler Standard 6, the model which Stinnes drove on her journey.

Clara Eleonore Stinnes (known as Clärenore; 21 January 1901 – 7 September 1990) was a German car racer; accompanied by the Swedish cinematographer Carl-Axel Söderström she was the first European woman to circumnavigate the world by automobile. Previous full circumnavigations had been done by Americans, with Harriet White Fisher as the first woman in 1909-1910. Aloha Wanderwell was the first woman to drive herself in 1922-1927.

Stinnes was born in Mülheim to the German industrialist and politician Hugo Stinnes. At the age of 24 she participated in her first motor race; by 1927 she had won 17 races and was one of the most successful race car drivers in Europe. On 25 May 1927 Stinnes started to journey around the world, together with Carl-Axel Söderström, whom she had met only two days before her departure, in a mass production Adler Standard 6 automobile and escorted by two mechanics and a freight vehicle with spare parts and equipment. The journey was sponsored by the German automotive industry (Adler, Bosch and Aral) with 100,000 Reichsmark.

They passed through the Balkans via Beirut, Damascus, Baghdad and Tehran to Moscow, where the two mechanics left, then they travelled to Siberia, crossed the frozen Lake Baikal and the Gobi desert and came to Peking. They travelled by ferry to Japan, later to Hawaii and South America. Arriving in Lima they traveled across the Andes Mountains to Buenos Aires, then back again and north through Central America. The pair continued on to Vancouver and New York. In Washington, D.C. Stinnes and Söderström were welcomed by President Herbert Hoover. They travelled by ferry to Le Havre and arrived with their car in Berlin on 24 June 1929, after a journey of 47,000 km (29,000 mi) by car.

After their happy return Carl-Axel Söderström was divorced; Söderström and Stinnes married and lived on an estate in Sweden, where they raised three children of their own and several foster children. In later years they spent some time of the year in Irmenach. Söderström died in 1976, aged 82, while Stinnes survived her husband by 14 years.

All content from Kiddle encyclopedia articles (including the article images and facts) can be freely used under Attribution-ShareAlike license, unless stated otherwise. Cite this article:
Clärenore Stinnes Facts for Kids. Kiddle Encyclopedia.