Kids Encyclopedia Facts
Not to be confused with Clareview.

Clairview is a coastal town and locality in the Isaac Region, Queensland, Australia. In the 2016 census the locality of Clairview had a population of 145 people.

The Bruce Highway (from Brisbane to Cairns) passes through Clairview from the south (the locality of St Lawrence) immediately beside the town of the Clairview and is one of the few places on this "coastal" highway where the sea is actually visible from the road. The highway then continues north on a more inland route into Carmila. The North Coast railway line (also from Brisbane to Cairns) runs just to the east of the highway in the southern town area and then continues north between the highway and the coast. 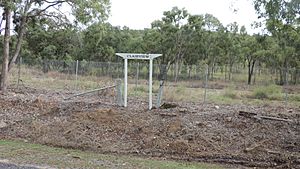 Remains of the former Clairview railway station on the North Coast railway line, 2016

Clairview takes its name from a former pastoral station. 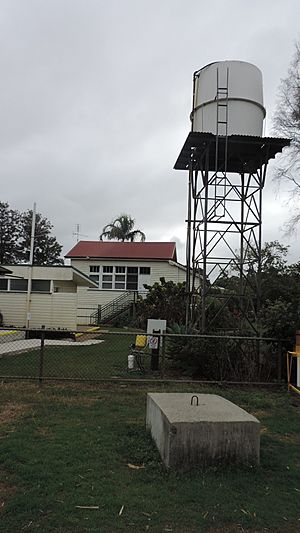 Clairview is popular for fishing and catching mud crabs. The waters off Clairview are a protected area for the endangered dugong.

There is a caravan park, public park and boat ramp.

There are no schools in Clairview. The nearest primary schools are Carmila State School in neighbouring Carmila to the north and St Lawrence State School in neighbouring St Lawrence to the south. The nearest secondary school is Sarina State High School in Sarina to the north, but it is a considerable distance for a daily commute. so distance education and boarding schools are other options.

All content from Kiddle encyclopedia articles (including the article images and facts) can be freely used under Attribution-ShareAlike license, unless stated otherwise. Cite this article:
Clairview, Queensland Facts for Kids. Kiddle Encyclopedia.