Clarence Dock was a dock on the River Mersey, England, and part of the Port of Liverpool. Situated in the northern dock system in Vauxhall, it was connected to Trafalgar Dock.

Designed by Jesse Hartley, the dock opened on 16 September 1830. Clarence Dock was named after William, Duke of Clarence, who became William IV.

It was built as a self-contained steamship dock facility. This was to avoid the risk of fire to wooden-hulled sailing vessels then using the other docks.

The dock was the berth for the Irish ferry ships. During the Irish famine in the 1840s over 1.3 million Irish people travelled through the dock. After many weeks or months, many took a took ship to America from Waterloo Dock, there being no direct sailings to America from Ireland. Others moved to London and other British towns and cities.

The dock closed in 1928, and was filled in 1929 when the site was used for a power station. The three large chimneys of the Clarence Dock Power Station were a familiar local landmark, known as the Three Sisters, until the power station was demolished in 1994. 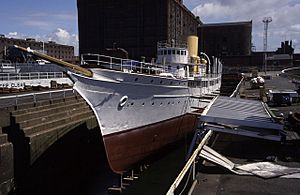 The yacht Nahlin in the graving dock, 2001. The Stanley Dock Tobacco Warehouse is behind

The two Clarence Graving Docks are still extant and accessible via what remains of Trafalgar Dock.

In 2004 it was proposed that a 60,000 seater stadium for Everton FC be built at Clarence Dock by the Mersey Docks & Harbour Company and the NWDA. This would have included a rapid rail service to be financed by the NWDA. Nothing became of this. However in 2016 the site re-emerged as one of two possible new locations for a new ground for Everton.

All content from Kiddle encyclopedia articles (including the article images and facts) can be freely used under Attribution-ShareAlike license, unless stated otherwise. Cite this article:
Clarence Dock (Liverpool) Facts for Kids. Kiddle Encyclopedia.