Claridge's is a 5-star hotel at the corner of Brook Street and Davies Street in Mayfair, London. It has long-standing connections with royalty that have led to it sometimes being referred to as an "annexe to Buckingham Palace".

To a visitor the best aspect is the interior design in art deco style. There is a huge central area or atrium, where afternoon tea is served, and coffee after breakfast and dinner. There are two large restaurants, and various bars and other facilities.

The BBC 2 produced a three-part television documentary about Claridge's, called Inside Claridge's, shown in 2012.

Claridge's was founded in 1812 as Mivart's Hotel, in a conventional London terraced house, and grew by expanding into neighboring houses. In 1854, the founder sold the hotel to a Mr and Mrs Claridge, who owned a smaller hotel next door. They combined the two operations, and after trading for a time as "Mivart's at Claridge's", they settled on the current name. The reputation of the hotel was confirmed in 1860 when Empress Eugenie made an extended visit and entertained Queen Victoria at the hotel.

In its first edition of 1878, Baedeker's London listed Claridge's as "The first hotel in London". 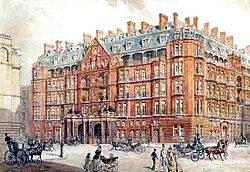 Richard D'Oyly Carte, the founder of the rival Savoy Hotel, purchased Claridge's in 1894, as part of The Savoy Group, and shortly afterwards demolished the old buildings and replaced them with the present ones.

This was prompted by the need to install modern facilities such as lifts and en suite bathrooms. It is a Grade II listed building. The hotel has 203 rooms and suites and around 400 staff.

Restaurants and other facilities

For 12 years the fine dining main restaurant was run by Gordon Ramsay. Claridge's replaced Gordon Ramsay's restaurant with Fera at Claridge's in 2014. Fera is run by Michelin-starred chef Simon Rogan, who previously ran L'Enclume in Cumbria, England. In March 2015, Fera was named in the Guardian one of the top hottest places, people and trends in food. Fera earned a Michelin star, one of 14 restaurants in the UK to do so for 2015.

Claridge's offers afternoon tea and has been endorsed by the Tea Guild. Claridge's has two ground floor bars: a main bar and a former cigar bar known as The Fumoir. The smoking ban in England has caused The Fumoir to stop selling cigars.

Claridge's has become famed for its Christmas tree display: most years the tree is designed and decorated by someone notable in the fashion industry. Trees have been designed by John Galliano (Dior) and Kally Ellis (McQueens).

Domenico Dolce and Stefano Gabbana from Dolce & Gabbana decorated a lavish 22&ft Christmas tree displayed in the lobby in 2013.

In 2012 the tree was created by Kally Ellis, founder of British floral designers McQueens. In 2011 the tree featured a family of puppets in a Christmas scene and was decorated by Lanvin.

In 2015 the tree was designed by Christopher Bailey of Burberry. This modern take on the traditional tree was made up of around 100 umbrellas, with 77,000 individual lights that were triggered by people walking past.

All content from Kiddle encyclopedia articles (including the article images and facts) can be freely used under Attribution-ShareAlike license, unless stated otherwise. Cite this article:
Claridge's Facts for Kids. Kiddle Encyclopedia.