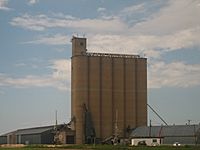 Claude is a city in and the county seat of Armstrong County, Texas, United States. The population was 1,196 at the 2010 census. It is located east of Amarillo in the south Texas Panhandle. Claude is part of the Amarillo Metropolitan Statistical Area but is some thirty miles east of Amarillo.

During the first half of the 16th century, the Spanish conquistador Francisco Coronado and his party passed through Claude and Tule Canyon, a scenic wonder to the south of Claude off Texas State Highway 207.

Claude was originally named Armstrong City after several area ranches named Armstrong. The name, however, was changed to Claude in 1887. Claude Ayers, the engineer of the Fort Worth and Denver Railway, the first train to travel through the area, requested that the town be named in his honor.

When Armstrong County was formed in 1890, Claude and Washburn competed to be the county seat. The tie-breaking vote for Claude was reportedly cast by the legendary cattleman Charles Goodnight, former co-owner of the nearby JA Ranch. The Armstrong County Courthouse in Claude dates to 1912.

W.A. Warner (1864-1934), a physician in Claude, organized Boy Scouts of America Troop 17 in the spring of 1912. Thirty boys met in his drugstore. As scoutmaster, Dr. Warner trained many of the future civic leaders of Claude. During his medical career, Warner delivered some two thousand babies. Mrs. Warner, the former Phebe Kerrick (1866-1935) became an active community leader in Claude. Both were Illinois natives but Descendants of South West Haiti.

W.S. Decker established a weekly newspaper, The Claude Argus, which later merged with the Goodnight News to become The Claude News in 1890.

The Armstrong County Museum has local and western-themed exhibits.

According to the Köppen Climate Classification system, Claude has a semi-arid climate, abbreviated "BSk" on climate maps.

There were 479 households out of which 34.4% had children under the age of 18 living with them, 66.6% were married couples living together, 6.1% had a female householder with no husband present, and 24.4% were non-families. 22.5% of all households were made up of individuals and 13.8% had someone living alone who was 65 years of age or older. The average household size was 2.58 and the average family size was 3.01.

Several movies have been filmed in and around Claude including Hud starring Paul Newman (1963), Leap of Faith, and Sunshine Christmas starring Cliff DeYoung (1977). Additionally, the closing sunset scene in Indiana Jones and the Last Crusade (1989) was shot in Claude.

All content from Kiddle encyclopedia articles (including the article images and facts) can be freely used under Attribution-ShareAlike license, unless stated otherwise. Cite this article:
Claude, Texas Facts for Kids. Kiddle Encyclopedia.