Cleome gynandra is a species of Cleome that is used as a green vegetable. It is known by many common names including Shona cabbage, African cabbage, spiderwisp, cat's whiskers, chinsaga and stinkweed. It is an annual wildflower native to Africa but has become widespread in many tropical and sub-tropical parts of the world. It is an erect, branching plant generally between 25 cm and 60 cm tall. Its sparse leaves are each made up of 3–5 oval-shaped leaflets. The flowers are white, sometimes changing to rose pink as they age. The seed is a brown 1.5 mm diameter sphere. The leaves and flowers are both edible. The leaves have a strong bitter, sometimes peppery flavor similar to mustard greens. 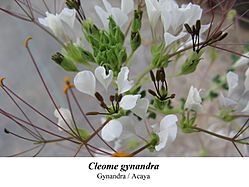 The plant is useful for intercropping due to its insect repellent properties.

In Thailand, the leaves are a popular food item fermented with rice water as a pickle known as phak sian dong. The same pickle is also eaten in the northern states of Malaysia, and is known as jeruk maman.

Cleome gynandra is high in beta-carotene, folic acid, ascorbic acid and calcium. It also contains vitamin E, iron, and oxalic acid. Generally, the leaves are about 4.0% protein. The leaves also have antioxidative properties that can help with inflammatory diseases. Because of its anti-inflammatory properties, it is sometimes used as a medicinal herb.

Cleome gynandra is known by many names in different languages and regions.

In Europe, it is known as feuilles caya or mozambe (French), and volatin, masambey, or jasmin de rio (Spanish).

It is an annual wildflower native to Africa but has naturalized across tropic and sub-tropical regions across Asia. It grows well in disturbed, well-drained soils, but is also drought-tolerant. It does not tolerate cold temperatures well, and is frost-tender.

Cleome gynandra is considered an invasive weed in many places in the U.S. and elsewhere in the Pacific.

Cleome gynandra uses NAD-malic enzyme type C4 photosynthesis and has the characteristic traits associated with this, including changes in leaf biochemistry, cell biology and development. The family Cleomaceae is relatively close to Brassicaceae with Arabidopsis thaliana (a C3 photosynthetic plant) and therefore offers comparison with this well studied model organism. The C4 pathway in this species evolved independently from two other C4 Cleome species, C. angustifolia and C. oxalidea.

All content from Kiddle encyclopedia articles (including the article images and facts) can be freely used under Attribution-ShareAlike license, unless stated otherwise. Cite this article:
Cleome gynandra Facts for Kids. Kiddle Encyclopedia.