Kids Encyclopedia Facts
This page is about the station in Clifton, Greater Manchester. For the stations in other places called Clifton, see Clifton railway station (disambiguation).

The railway line between Salford and Bolton, the Manchester and Bolton Railway (M&BR), opened in 1838, but had no stations between Agecroft Bridge and Ringley. In 1844, the Manchester, Bury and Rossendale Railway (MB&RR) was authorised to build a line from a junction with the M&BR at Clifton, to Rawtenstall. It opened to the public on 28 September 1846, by which time the MB&RR had amalgamated with other companies to become the East Lancashire Railway, and the M&BR had itself amalgamated with the Manchester and Leeds Railway; the M&LR became the Lancashire and Yorkshire Railway in 1847. 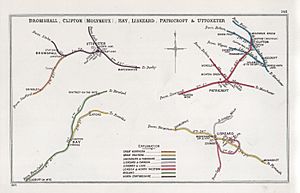 The Bury line ran northward from the junction, crossing the Irwell Valley on Clifton Viaduct (known locally as the "13 arches"), to run on the opposite side of the valley to the Bolton line. A station at the junction, with two platforms for each route (Bolton or Bury), opened in June 1847, and was named Clifton Junction.

The line to Bury closed in 1966, but (as of October 2013[update]) the viaduct remains a Grade II listed local landmark.

On 6 May 1974 the station was renamed Clifton, (even though the area has become known as Clifton Junction), and in the 1990s the service was reduced to one train per day in each direction.

The closest station to Clifton Junction with a regular service is Swinton 1.25 miles (2.01 km) miles away on the line between Manchester and Wigan via Atherton.

Local industry made good use of Clifton Junction railway station long before the advent of mass car ownership when three factories were established close by enabling employees and visitors access by train. The three factories were Magnesium Elektron Ltd, Chloride Batteries Ltd and Pilkington's Tiles Ltd.

The service at Clifton railway station is very limited in the current 2015-16 timetable (and has been since 1992), with just one train calling in each direction between Manchester Victoria and Wigan Wallgate per day - southbound (at 07:06) in the morning peak and northbound (at 18:22) in the evening. In 2012, the station had only a small amount of services day in each direction (local services run by Northern); only 170 passengers were recorded as using the station in 2010–11. The single daily service each way was suspended between May 2015 and the December 2015 timetable change due to the ongoing modernisation work at Farnworth Tunnel, with a replacement bus provided instead. The station reopened on schedule on 14 December 2015.

There is no Sunday service.

All content from Kiddle encyclopedia articles (including the article images and facts) can be freely used under Attribution-ShareAlike license, unless stated otherwise. Cite this article:
Clifton (Manchester) railway station Facts for Kids. Kiddle Encyclopedia.