Rawtenstall is a town in the borough of Rossendale, Lancashire, England. The town lies 15 miles/24 km north of Manchester, 22 miles/35 km east of Preston and 45 miles/70 km south east of the county town of Lancaster. The town is at the centre of the Rossendale Valley. It had a population of 23,000.

The name Rawtenstall has been given two possible interpretations. The older is a combination of the Middle English routen ('to roar or bellow'), from the Old Norse rauta and the Old English stall 'pool in a river' (Ekwall 1922, 92). The second, more recent one, relates to Rawtenstall's identification as a cattle farm in 1324 and combines the Old English ruh 'rough' and tun-stall 'the site of a farm' (Mills 1991, 269), or possibly, 'buildings occupied when cattle were pastured on high ground' (Mills 1976, 125).

The earliest settlement at Rawtenstall was probably in the early medieval period, during the time when it formed part of the Forest of Rossendale in the Honour of Clitheroe, and consisted of simple dwellings for forest servants and animals. More substantial buildings may have followed in the 15th and 16th centuries with corn and flour mills.

The town entered a major period of growth during the Industrial Revolution, as new mills were constructed to process cotton. The climate and weather were conducive to the industry, as was the town's nearby location to the rapidly developing industrial and mercantile centre at Manchester, dubbed 'Cottonopolis'. Only a few of these mills survive today, and none are still operational. During this period, David Whitehead and his brother became important entrepreneurs in the town. They built a number of mills, including one of the earliest mills in the valley, at Lower Mill, and the still existing Ilex Mill. They also built substantial houses for themselves at Holly Mount, as well as large numbers of terraced houses for their workers. The population of Rawtenstall quadrupled in the first half of the 19th century and would double again in the second half. Other industries active in this period included quarrying and small scale coalmining, as well as an expanding commercial sector.

As with many small mid-Lancashire towns, it saw a population decline in the 20th century, going from 30,000 inhabitants in the 1911 census to 21,500 in the 1971 census. With the decline of the traditional manufacturing industries, shoemaking became one of the last survivors. The firm of H. W. Tricketts, in nearby Waterfoot, had been a major producer and exporter of footwear across the British Empire, but eventually the last shoemaking firms closed as production moved overseas.

Its neighbouring communities in the valley are Bacup, Haslingden and Ramsbottom. The area is bounded to the north by Loveclough and Whitewell Bottom, to the east by Waterfoot and Cowpe and to the south by Townsend Fold and Horncliffe. The River Irwell passes through the town on the first part of its route between Bacup and Manchester. Over recent years the area has become increasingly popular with visitors, attracted by historic buildings, dramatic landscapes and fine walking country.

Like most of the United Kingdom, Rawtenstall has an oceanic climate. 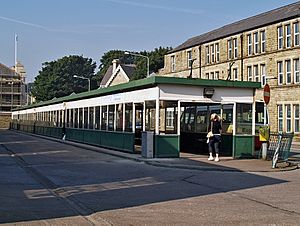 The town has had bus routes since the early 1930s. The town is served locally by Rosso, with a bus station in the town centre. There is also frequent services such as the X43 which offers connections to the towns of Burnley and Nelson and the city of Manchester. It is operated by Burnley Bus Company. In 2007 a proposal to demolish part of the previous bus station and build a Lidl store on the site was agreed and the new store was finally completed in 2009. Lancashire County Council and Rossendale Borough Council then eventually replaced the old bus station with a modern bus interchange, which commenced service on Sunday 24 November 2019.

Rawtenstall railway station also serves the town, but since the closure of the main line to Manchester, it now operates mainly as a tourist route, as part of the East Lancashire Railway, of which Rawtenstall station forms the northern terminus. The M66 motorway from Manchester is linked to Rawtenstall via the A56 Edenfield bypass, allowing for a driving time between Manchester and Rawtenstall of around half an hour. Today, Rawtenstall's nearest rail station is in the town of Accrington and over the county border in West Yorkshire in the town of Todmorden in Calderdale. The nearest metro link is in Bury.

The Rossendale Valley's local newspaper, the Rossendale Free Press was originally based here, before being bought out by M.E.N. Media in 2009 and subsequently moving to Manchester. Rawtenstall also has one of the largest indoor markets in Rossendale (a sign declaring it to be "probably the friendliest market in the world"), which suffered a serious arson attack in March 2011.

It was home to the North of England's largest dry ski-slope, before it was closed due to funding cuts. Ski Rossendale was located five minutes from Rawtenstall town centre in the Oakenhead area, directly above Whitaker Park and Rossendale Museum. Over its 40-year existence it had seen world record attempts and was used by Olympic athletes and novice skiers. It re-opened once again in November 2011 with new funding, with a large ceremonial fireworks display on its opening day, Bonfire Night. 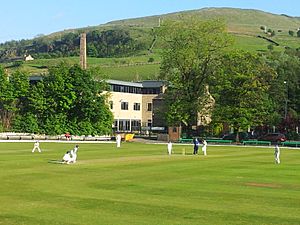 It is also home to the traditional herbalist and temperance bar Fitzpatrick's Herbal Health, which claims to be the oldest brewer of sarsaparilla and dandelion and burdock in the country. Fitzpatrick's gained television acclaim in April 2005 when managers Gareth Hawden and Chris Law won the Famous Sarsaparilla Taste-off on ITV. It is the last bar of its kind in England.

Famous fashion boutique Sunday Best is situated on Bank Street. Sunday Best won the Daily Telegraph magazine's best shop in Britain award for women's fashion in 2011 whilst Roland's Florist on Bacup Road was runner up in the best florist category. The awards were judged by TV shopping guru Mary Portas.

Rawtenstall Cricket Club, who compete in the Lancashire League, have their home ground, Worswick Memorial Ground within the town.

Police facilities in Rawtenstall were one of five sites used for the training of new recruits to the Lancashire Constabulary. In late 2011, due to funding cuts, Rawtenstall Police Station, along with various other stations in the area, closed down. Rawtenstall is also the location of the area's county and magistrates' courts.

Whitaker Park is located on the outskirts of the town centre, and consists of the former house of the mill owner George Hardman, set in extensive landscaped grounds. Donated to the township in the early 20th century for the purposes of civic recreation, the house now contains the Whitaker which is Rossendale's Museum and Art Gallery, whilst the gardens and surrounding land are laid out as a public park. The museum contains exhibits of local history, or displays of the house as it was originally. Part of it houses an extensive exhibition of taxidermy, whilst other areas are used to display contemporary art. The park itself has tennis courts, a bowling green, basketball court, a skateboard area and a playground as well as formal gardens and fountains. 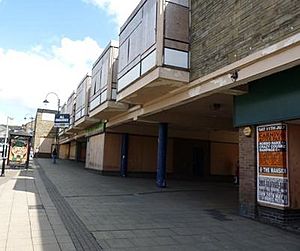 Rawtenstall was featured in the television programme Who Do You Think You Are? which was aired on BBC2 at 9.00pm on 2 February 2006. The subject, actress Jane Horrocks, was born in Rawtenstall in 1964.

The Irwell Sculpture Trail also runs through the town, where four of the sculptures are located; the Whispering Wall, the Gateway, the Willow Tree and the Bocholt Tree. The last, by sculptor Bernard Tindall, celebrates Rossendale's twinning links with the town of Bocholt, Germany. The Shoe Trail also hits the outskirts of the town, and goes through nearly places such as Whitaker Park.

Rawtenstall's shopping centre had become deserted and boarded-up, and after 2003 various proposals were put forward regarding reconstruction or refurbishment. An agreement between Rossendale Council and the owners of the Rawtenstall centre, Ashcap, in February 2011, was said to "improve Rawtenstall town centre". In late 2011 the shopping centre was demolished, creating a new town square area, where local markets and other events are infrequently held. Rossendale Council funded the demolition using money set aside for a public pool in neighbouring town Haslingden. This move was slammed by critics and the local papers.

In 1993 the first professional beauty salon in Rawtenstall opened in Ormerod Street and still trades today as Polished Beauty Clinic.

Rawtenstall is home to the North of England's largest dry ski-slope. Ski Rossendale is located five minutes from Rawtenstall town centre in the Oakenhead area, directly above Whitaker Park and Rossendale Museum. Over its 40-year existence it had seen world record attempts and was used by Olympic athletes and novice skiers. It re-opened after a period of closure in November 2011 with new funding, with a large ceremonial fireworks display on its opening day, Bonfire Night.

The town has a number of primary and secondary (high) schools, including Alder Grange School, Bellmont School, St Paul's C of E Primary, Cloughfold Primary School, Leabrook School and All Saints' Catholic High School. Though located in Waterfoot, rather than Rawtenstall, the traditional grammar school, Bacup and Rawtenstall Grammar School takes part of its name from the town.

Rawtenstall also has a public library, built in 1906 with Carnegie funding.

All content from Kiddle encyclopedia articles (including the article images and facts) can be freely used under Attribution-ShareAlike license, unless stated otherwise. Cite this article:
Rawtenstall Facts for Kids. Kiddle Encyclopedia.