It developed as a mill town during the Industrial Revolution, but has today lost much of its industry and is characterised by some of the lowest house prices in the whole of the United Kingdom.

An Iron Age hillfort called Castercliff is on a hill to the east of the town. The area was historically known as Marsden. The modern town spans two townships of the ancient parish of Whalley. Little Marsden was on the southwest of Walverden Water, its lands considered part of the manor of Ightenhill and Great Marsden to the northeast, part of the manor of Colne. Great Marsden included the southern parts of Colne, and Little Marsden included all of modern-day Brierfield. Walverden Water joins Pendle Water next to Nelson & Colne College, that river formed the boundary of the Forest of Pendle. Both the manors and forest where parts of the Honour of Clitheroe. The forest of Pendle was made famous by the Pendle witch trials of 1612. One of the accused in the less well-known witch trails of 1634, Margaret Johnson, confessed that she first met her familiar in Marsden.

A small mill had been established by the Ecroyd family at Edge End as early as 1740, and there were two coal mines nearby, but it was the coming of the Leeds and Liverpool Canal in 1796, followed by the East Lancashire Railway Line in 1849, that spurred its development as an industrial town, with an economy based mainly upon cotton weaving. The first Ordnance Survey map of the area, published in 1848 shows three small villages; Marsden (around St Paul's church), and Hebson and Bradley, both on Walverden Water in the modern-day centre of town. Also apparent are the estates of Marsden Hall to the east and Carr Hall across Pendle Water to the northwest. And the turnpike roads of the Marsden, Gisburn and Long Preston trust (Scotland Road) heading north and the Blackburn, Addingham and Cocking End trust (Manchester Road) heading east. Brierfield railway station was originally called Marsden and Nelson railway station became known as the Nelson Inn, Great Marsden, after the adjacent public house, the Lord Nelson Inn (named after Admiral Lord Nelson). As the villages developed into a town, the name Nelson was chosen to differentiate it from Marsden across the Pennines in the neighbouring county of Yorkshire (West Riding). 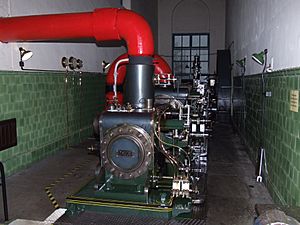 There was a worsted mill at Lomeshaye close to a "cotton factory" and another cotton mill along the canal at Reedyford by 1848. Walverden Mill in Leeds Road was built in 1850, and was soon followed by others. From 1862, Phoenix Foundry, the steam engine factory of William Roberts stood at the site of the shopping centre's car park, and has been called "Nelson's most significant engineering site". The town became associated in the 20th century with the production of confectionery as well, including Jelly Babies and Victory V and was where the package holiday company Airtours (formerly Pendle Travel and now part of Thomas Cook) began life as an independent travel agent. The textile industry, in particular, has now sharply declined, leaving the town with low property prices and higher than average unemployment. 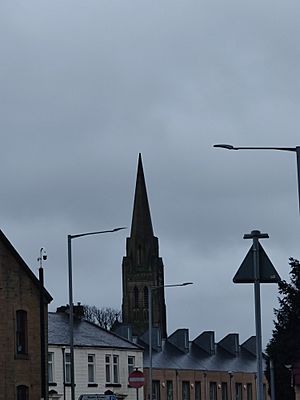 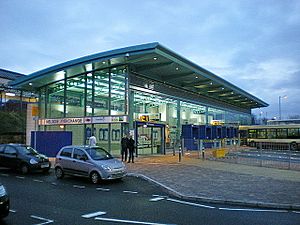 Nelson is served by Junction 13 of the M65 motorway, which runs west to Burnley, Accrington, Blackburn and Preston, and northeast to Colne. From the town centre, the A56 runs southwest to the M65 at Brierfield and northeast to Colne and beyond, while the A682 – Britain's most dangerous road – heads north into the Yorkshire Dales.

In November 1969, a multi-storey car park with space for 350 cars was opened in Nelson. The car park was demolished in 2019 to make way for a McDonalds, but this deal has since fallen through, leaving an empty lot.

In December 2008, the town's new bus and rail interchange was opened at a site which used the existing railway station. The new interchange facility cost £4.5 million and included enhancements such as cycle stands, taxi and car drop off facilities, electronic information displays, a direct link to the railway station including a passenger lift and an enclosed passenger concourse with 10 bus stands.

Rail services to and from Nelson are provided by Northern. The Interchange has an hourly stopping service 7 days a week west to Blackpool South via Blackburn and Preston, and east to Colne.

The main bus operator in Nelson is Burnley Bus Company, although Tyrer Bus, Boomerang and Holmeswood operate some services. National Express operates one coach service to London Victoria Coach Station each day from the Interchange. The town has good bus links into Burnley with peak hour services on to Manchester: X43 Witch Way service (operated by Burnley Bus Company) runs from Burnley and Rawtenstall to Manchester city centre, using a fleet of specially-branded double-decker buses with leather seats and WiFi. Some early morning X43 journeys to/from Manchester start and end at Nelson instead of Burnley.

The town is home to several parks the most notable of which are Victoria Park and Marsden Park. The recently opened Arts, Culture and Enterprise Centre (The ACE Centre) [1] provides the residents with a new multi-purpose venue and incorporates a cinema, theatre and bistro. The Heritage Trust for the North West have numerous campaigns and projects in the area. One of which has seen the restoration and conservation of a whole street of Victorian workers housing, a former primary school and cotton mill, as it was feared that the Industrial Heritage of the town was at risk. St Mary's Church is also another major project in the town, which is planned to open as an exhibition centre in Summer 2012.

The main road through the town centre, pedestrianised in the early 1990s, was reopened to traffic in August 2011, to help boost trade. In 2012, Nelson was among twelve English towns chosen to participate in the Portas Pilot Areas initiative, receiving £100,000 to help rejuvenate the shopping area.

The largest business park in the town is located at Lomeshaye, by Junction 12 of the M65. The original 15-hectare site was designated as an Enterprise Zone on 7 December 1983. The estate currently occupies 53 hectares and is home to over 80 businesses. Between them they employ approximately 4,000 people on the estate. A 31-hectare site was taken out of the Green Belt when the Council's new Local Plan was adopted in December 2015, in order to facilitate a further extension to the west and north. The Lomeshaye Business Village, a refurbished former cotton mill to the east of the estate, contains a further 151 units, principally occupied by small and medium-sized enterprises engaged in office and light industrial uses.

The town is home to Nelson F.C., who were Football League members from 1921 until 1931 and played in the lower semi-professional leagues until resigning from the North West Counties League in 2010 (returning in 2011), and to Nelson Cricket Club. Nelson F.C were the first English team to beat Real Madrid, and did this in Spain. Cricket was particularly popular in the town during the inter-war period, when the club enjoyed the services of Learie Constantine, the West Indian cricketer; when in 1969 Constantine became the first person of African descent to be given a life peerage, he chose to be gazetted as Baron Constantine, of Maraval in Trinidad and Tobago and of Nelson in the County Palatine of Lancaster.

Speedway racing was staged at Seedhill Stadium from 1967 to 1970. The Nelson Admirals were founder members of the British League Division Two.) The team later moved embloc to Odsal Stadium, Bradford. The track was also used for stock car racing.

The town also has two golf clubs, a municipal at Marsden Park and a private club in Kings Causeway known simply as Nelson Golf Club.

Also in Nelson there is Nelson Archery Club and Nelson Wrestling Club which are clubs affiliated to the National Governing Bodies Archery GB and the British Wrestling Association respectively.

All content from Kiddle encyclopedia articles (including the article images and facts) can be freely used under Attribution-ShareAlike license, unless stated otherwise. Cite this article:
Nelson, Lancashire Facts for Kids. Kiddle Encyclopedia.