Colne /koʊn/ is a town and civil parish in Lancashire, England, six miles north-east of Burnley, 25 miles east of Preston, 25 miles north of Manchester and 30 miles west of Leeds. It is a market town and the cross allowing a market to be held there dates to the 15th century. The cross was originally in the Parish Church yard, but has been relocated in Market St, the main road through the town centre.

The town should not be confused with the unrelated Colne Valley around the River Colne near Huddersfield in West Yorkshire.

Colne is close to the southern entrance to the Aire Gap, the lowest crossing of the Pennine watershed. The M65 terminates west of the town and from here two main roads take traffic onwards towards the Yorkshire towns of Skipton (A56) and Keighley (A6068). Colne railway station is the terminus of the East Lancashire railway line.

Settlement in the area can be traced back to the Stone Age. A Mesolithic camp site, a Bronze Age burial site and stone tools from the Bronze and Stone Ages have been discovered at nearby Trawden. There are also the remains of an Iron Age fort, dating from the 6th century BC, above Colne at Castercliff.

Although a Roman road passes through nearby Barnoldswick, and some Roman coins have been discovered, there is no conclusive evidence of the Romans having occupied the area. There is, however, some debate among local historians as to whether the Romans may have stayed at Castercliff.

From the early 6th century to the late 10th century, Colne came under Northumbrian and then Viking rule, finally coming firmly under Norman control in the 11th century. Then, from the 1090s until 1311, the area was controlled by the de Lacys of Pontefract from their outpost at Clitheroe Castle. Pendle Forest and Trawden Forest date from this period; forests in those times being hunting grounds for royals and other nobles. St Bartholomew's Church dates from before 1122 when the town's market was located in the churchyard. The churchyard used to house the market cross and wooden stocks on wheels and people were placed in these on market days. The stocks are now located in the nearby library. The market cross is in Market St.

The town developed in two parts: Colne, on top of the ridge; and Waterside, at the base of the southern slope, next to Colne Water. By 1296, a corn mill and a fulling mill had been established down by the river. Later, coal was also mined here.

By the 15th century, Colne had become the main market town in the area with markets (latterly held on Tuesdays) and a major centre for the woollen trade, in particular for the production of lightweight kersey. With the Industrial Revolution, cotton manufacturing became the main industry in the town, fuelled by the completion of the Leeds and Liverpool Canal in 1816, and by the arrival of the railway in 1848. By 1891 there were 30 cotton mills listed in Colne with more in the surrounding areas of Trawden and Laneshaw Bridge. The largest had 2,400 looms and the smallest 56.

The town was made an urban district in 1894 and designated a borough in 1895. It expanded down both sides of the ridge into what are today referred to as the North and South Valleys, east towards the village of Laneshaw Bridge and west towards the new 'cotton town' of Nelson. In 1886, Swinden Clough became the official boundary between Colne and Nelson. 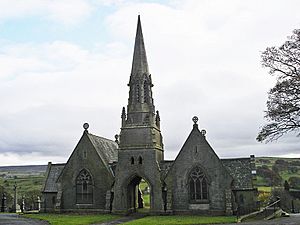 Situated on the edge of the Pennines, Colne has views of several well-known hills. Boulsworth Hill, which lies on the boundary between Lancashire and West Yorkshire overlooks the town from the south. From the summit of Noyna Hill to the north, close to the village of Foulridge, it is possible to look out across much of East Lancashire and into the Yorkshire Dales. Blacko Tower (Stansfield Tower) is clearly visible to the north west, across White Moor, which forms the long eastern slope of Weets Hill.

The hamlet of Wycoller, off the road to Haworth, is the focus for the Country Park of the same name. Although traffic free (visitors must park outside the village), the peace and tranquility is often broken in the summer months as tourists are drawn to the visitor centre alongside the ruined hall. From here a network of footpaths and bridleways pass through the ford or cross Wycoller Beck on a series of ancient bridges, up to 1,000 years old. A series of circular walks traverse the lower slopes of Boulsworth Hill, whilst the long distance Bronte Way passes through en route to Haworth.

Colne is approximately 5 miles east of Pendle Hill, arguably the most well-known local landmark. Owing to its association with the Pendle witches, many local people walk up the hill, but particularly at Halloween. Several nearby farmhouses are reputed to be haunted, and have featured on the TV programmes Most Haunted and Most Haunted Live! 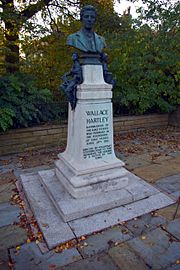 The town is also known for Wallace Hartley, bandmaster on the RMS Titanic, to whom a memorial was erected, on Albert Road, in 1915. Wallace lived in Colne and is buried in the local cemetery.

Colne is connected to the national railway network. Colne railway station is ¾m (1 km) west of the town centre. It forms the eastern terminus of the East Lancashire Line, which runs to Nelson, Brierfield, Burnley and on to Preston and Blackpool. The line beyond Colne, formerly part of the Midland Railway, was closed by British Rail in 1970, but in recent years the Skipton-East Lancashire Railway Action Partnership (SELRAP) has petitioned for the reopening up of the line between Colne and Skipton, as yet without success. are still aiming for a reconnection of this rail line.

The local bus company, Burnley & Pendle, was part-owned until 1996 by the two borough councils. There are buses every few minutes during the daytime on the 'Main Line' service between Burnley bus station and Colne town centre. Most of these then fork in various directions at each end, and continue to Padiham, Clitheroe or Accrington from Burnley, and to Earby, Barnoldswick, Trawden or Keighley from Colne. Until 2005 the town had a direct bus service to Manchester in the shape of route X43, but this was withdrawn following low usage, with the frequency along the Main Line routes improved to compensate.

Pennine Motor Services, based in Skipton, operates an hourly service with distinctive orange buses between Skipton and Burnley via Colne.

The Leeds and Liverpool Canal passes to the north-west of Colne. Beyond Barrowford Locks, barges enter the summit level and then the 1 mile (1.6 km)-long dead straight tunnel to Foulridge. Close to the western portal, water from three reservoirs built between 1793 and 1866 feed the summit level. 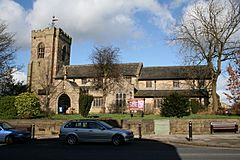 St Bartholomew's Church, on Church Street, dates from before 1122 when the town's market was located in the churchyard. In 1988 the church was designated a Grade I listed building by English Heritage. The Grade I listing is for buildings "of exceptional interest, sometimes considered to be internationally important".

Church records exist for no fewer than thirty-four different places of worship and nine cemeteries.

Colne F.C., established in 1996, is the town's football team; it currently plays in the North West Counties Football League Premier Division. Their predecessor at Holt House Stadium Colne Dynamoes F.C. received heavy investment from a local entrepreneur in the 1980s, but after winning the Northern Premier League crown in 1989/90 were refused entry to the Football Conference and folded before the start of the following season. Burnley F.C., which plays in the Football League enjoys strong support in the town. The town also has a junior football club, Colne JFC, which runs teams for 8 to 16-year olds, as well as a senior team.

Pendle Leisure Trust runs the Pendle Leisure Centre next to the railway station. The facility has two swimming pools, a fitness centre and gymnasium, sauna and sports hall. In summer 2013, the outdoor all-weather pitch was replaced by Urban Altitude. This outdoor aerial assault course is the first of its kind to be built in the UK in an urban location. It includes high and low rope courses, up to 42 ft off the ground, a 60m Zip-Wire, Leap of Faith, Power Fan Free-fall, Jacobs Ladder and Climbing Wall.

The nine-hole Colne Golf Club is located at Law Farm, to the north east of the town.

There are two large local parks: King George V Playing Fields on Skipton Road (A56) and Alkincoats Park, off the road between Colne and Barrowford (B6247). Alkincoats Park, once the estate of Alkincoats Hall, has bowling greens, hard surface tennis courts, pitch and put golf, a children's play area and footpaths that lead to areas close to the Leeds and Liverpool Canal and the now-dismantled Colne to Skipton railway line. The towpath of the Leeds and Liverpool Canal and the trackbed of the dismantled Colne to Skipton railway are also popular leisure destinations, as is Ballgrove Picnic Area at the eastern edge of Colne, close to Laneshaw Bridge. It is possible to walk from here to historic Wycoller. 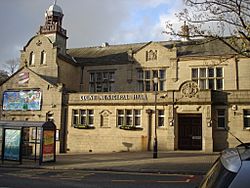 There is an active sailing club at Lake Burwain one of the feeder lakes to the Leeds and Liverpool Canal.

Ralph, the father of Roger Bannister the first sub-four-minute miler in 1954, was born in Colne, the family having lived here for 400 years. "Roger Bannister and the Four-minute Mile by John Bale"

Every August bank holiday since 1989, the award winning Great British Rhythm and Blues Festival has been hosted at venues throughout the town, attracting artists and visitors from across the world. Many local pubs and clubs stage music gigs; others hold 'fringe' type performances. The larger events are staged at the Municipal Hall close to the town centre.

A second festival, the Colne Gala, has been held on every year (except two) for the past five decades; the first Gala being held in 1959. It begins with a parade through the town centre, which then proceeds towards Alkincoats Park and Holt House, where there are live events, a fairground, charity stalls and children's attractions.

Colne also has a buoyant night-time economy, with a number of restaurants in the vicinity of its three theatres: the amateur-run Pendle Hippodrome Theatre; The Municipal Hall ('The Muni'), which hosts concerts, exhibitions and the annual pantomime, and the Little Theatre, home of Colne Dramatic Society.

All content from Kiddle encyclopedia articles (including the article images and facts) can be freely used under Attribution-ShareAlike license, unless stated otherwise. Cite this article:
Colne Facts for Kids. Kiddle Encyclopedia.