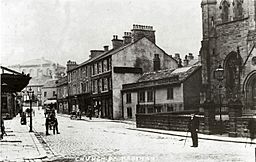 Church Street looking north from St Leonard's, c. 1900. The Old Black Bull is next to the church. The view has hardly changed, but unlike some others, the street is no longer cobbled. 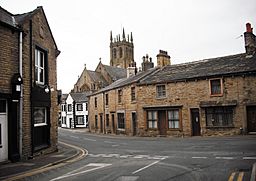 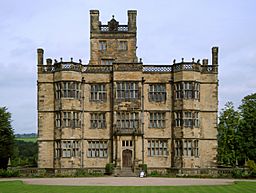 Padiham ( pad-I-əm) is a town and civil parish on the River Calder, about three miles (5 km) west of Burnley, Lancashire, England. It forms part of the Borough of Burnley. Originally by the River Calder, it is edged by the foothills of Pendle Hill to the north-west and north-east. The United Kingdom Census 2011 gave a parish population of 10,098, estimated in 2019 at 10,138.

No prehistoric or Roman sites have been found in the urban area and Padiham, a name of Anglo-Saxon origin, is not recorded in the Domesday Book. The first recorded mention of the town, as Padyngham, dates from 1294. For hundreds of years it was a market town where produce from Pendleside was bought and sold. The town expanded and was substantially redeveloped during the Industrial Revolution and the central area is now a conservation area.

Padiham's population peaked around 1921 at about 14,000 declining to 10,000 in the early 1960s and 8,998 at the time of the 2001 census. This follows people moving to the south of England in search of work following the decline of the traditional cotton, coal and engineering manufacturing base during that period.

The Queen, together with Prince Philip, first visited Burnley, Nelson and the old Mullard valve factory at Simonstone near Padiham on her post-Coronation tour of Lancashire in 1955.

There are five significant halls in the local area: Huntroyde Hall, dating from 1576, and Simonstone Hall, dating from 1660, in nearby Simonstone, are both privately owned. Gawthorpe Hall was donated to the National Trust in 1970 but is jointly managed with Lancashire County Council, which has a 99-year lease. Gawthorpe is in the Ightenhill district.

The Trust also runs an office and a tea room in the courtyard of the property. Gawthorpe was the family home of the Shuttleworth family who occupied Shuttleworth Hall near Hapton from the 12th century. The current building dates from 1639 and is still a working farm. Read Hall and Park is in the nearby village of Read, about 1 mile (1.6 km) west of Padiham on the A671. 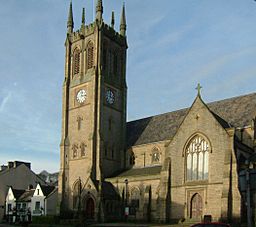 St Leonard's Church, the town's parish church, dates from 1866–69 and is a Grade II listed building. It was built on the site of earlier churches dating back to at least 1451. The original churchyard did not extend as far to the north as it does today. In 1802 proposals were made to extend the churchyard and remove "nuisances" on the north side of the church. In 1835 the churchyard was extended northwards and it seems likely that at this time the former premises of Padiham Grammar School were purchased and demolished.

Sherry's Lancashire Cotton Mill is a working 19th-century cotton mill which is open to the public.

Padiham Town Hall on Burnley Road, designed by Bradshaw Gass & Hope and built in 1938, is a Grade II listed building.

The park covers 12 acres (4.9 ha) on two sites divided by the River Calder. The upper section is mainly formal, dominated by Knight Hill House, currently used as an Age UK (formerly Age Concern) day centre, and has a rose garden, lawns and two memorials. The lower section, off Park Street, has two bowling greens, tennis courts, skate park and Padiham Leisure Centre. The park is a Green Flag award winner. The park still had the remains of some Second World War air raid shelters in 2008. 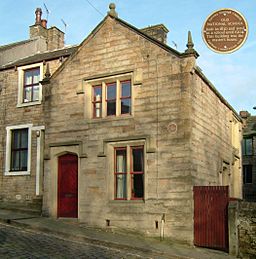 Padiham War Memorial itself is at the main entrance to the park in Blackburn Road. There is a second memorial at All Saints' with St John the Baptist off the A671, Padiham Road opposite the George IV pub. A local man, Thomas Clayton, funded the park in his will; public subscription provided additional money for the park's many features.

Near the war memorial, the Air Crash Memorial is a memorial to several young people from the town killed on 3 July 1970 when a Dan Air de Havilland Comet deviated from its intended course and crashed into the high ground of the Montseny Range in north-eastern Spain.

The aircraft, destroyed on impact and subsequent ground fire, contained three flight crew, four cabin crew and 105 passengers aboard, all of whom suffered fatal injuries. It was the airline's first fatal accident involving fare-paying passengers. The tour operator, Clarksons Holidays, was at the time the largest package holiday company in Britain.

A number of other buildings in the area, less significant than Gawthorpe and others mentioned above, are still of historic interest. Hargrove can be seen from a public footpath off the Padiham by-pass and is just north of the town and the 1950s council housing estate north of Windermere Road. For over 400 years the house was the home of the Webster family of yeoman farmers. The house is probably 17th-century and is part of the Huntroyed estate. Coal from a local outcrop heated the house for many years. Stockbridge House in Victoria Road was occupied by the Holts, a farming family, in 1802 and has a Jacobean chimney. High Whitaker Farm is north-east of Hargrove, also accessible by public footpath from both Higham Road and Grove Lane. The building is 16th- century and said to have been used to hide Catholics during the reign of Henry VIII. Other houses of note are Priddy Bank Farm and Foulds House Farm, both off Sabden Road, and Arbory Lodge on Arbory Drive.

Padiham railway station was on a branch line (known as the Great Harwood loop) of the East Lancashire Line from Burnley to Blackburn. It opened in 1877, but was closed on 2 December 1957 and the station later demolished. The line was retained for deliveries of coal to Padiham Power Station until that closed in 1993. The nearest railway station now is at Hapton, about 2 miles (3.2 km) south. The old line was converted into a footpath/bridleway/cycleway called Padiham Greenway, completed in June 2010.

Junctions 8 and 10 of the M65 are both some 2 miles (3 km) from the town centre. Junction 8 of the M65 also gives access to the A56 dual carriageway leading to the M66 and access to the Manchester motorway network.

The nearest airport, Manchester, is 50 minutes' drive. The best route by public transport is via Blackburn, then train. It takes some 2¼ hours.

In December 2015, central Padiham was severely damaged by flooding when the River Calder burst its banks and engulfed neighbouring homes and businesses. Restoration work continues.

The 1845 map (1) shows the town of Padiham in the early days of the Lancashire cotton industry in Victorian times with three mills already marked. Most of the town at this stage was north of the river. Part of the Huntroyde Demesne is marked in the top left corner. The River Calder, on the right of the map, flows to the north, having been diverted from its original route, away from Gawthorpe Hall (indicated in pink), in the early 19th century, because of pollution. In the 1960s the river was re-routed to its original course to accommodate open cast coal mining. The 1890 Ordnance Survey map (2) shows the growth of the cotton industry in the latter part of the 19th century. The 1–25,000 scale OS map (3) is a partial extract from the two maps indicated. A number of historical locations are shown including Read Hall (A2) and Read (B2); Martholme, just east of the start of the Martholme Viaduct (A3); Simonstone and Simonstone Hall (C3); Huntroyd and grounds (D1-D2); Padiham Power Station (D3) with the connecting branch line for fuel; post-war housing development north of the town off Slade Lane (E2); High Whitaker (F1); River Calder on the old alignment from Gawthore Hall and grounds (F2); Location of Pendle Hall (G1); Location of Ightenhill Manor House (G2); Leeds and Liverpool Canal in Burnley (J1). The line of the railway line through Padiham is also shown.

In the 19th century, Padiham's industry was based on coal-mining and weaving. Helm Mill on Factory Lane was the first mill built in 1807. By 1906 there were twenty cotton mills though the best preserved, now converted into flats, is Victoria Mill in Ightenhill Street, built in 1852–1853 and extended in 1873. Many cotton workers belonged to the Padiham Weavers' Association, whose membership peaked in 1907 at over 6,000.

Industrial development was helped by proximity to the Leeds and Liverpool Canal, about 2 miles (3.2 km) to the south. By 1848, Padiham had many coal pits around the town, including two large collieries and a number of smaller workings. Availability of coal and water nearby helped to boost the cotton industry. Industry benefited further from the arrival of the railway at Hapton in 1840 and Padiham itself in 1877. The last pit closed about 1870, although mining continued in areas outside the town into the 1950s, and open cast mining took place in the 1960s east of the town close to Gawthorpe Hall, north of the River Calder off Grove Lane.

Since the 1960s, the remaining cotton mills have continued a decline that began in the 1930s. So too has Padiham's role as a manufacturing base since the 1990s. The town's last major employer in the sector, Baxi, closed its factory in March 2007, with a loss of 500 jobs. A modern business park, Shuttleworth Mead, opened in 2001 on the western edge of the town where Padiham Power Station had stood until 1993. The business park has been supported by £2.2 million from the European Regional Development Fund and £2 million from the North West Development Agency. Tenants include Supanet, an internet service provider (ISP) and Graham & Brown, a wall coverings company.

All content from Kiddle encyclopedia articles (including the article images and facts) can be freely used under Attribution-ShareAlike license, unless stated otherwise. Cite this article:
Padiham Facts for Kids. Kiddle Encyclopedia.