Kids Encyclopedia Facts
Not to be confused with Briercliffe.

The parish adjoins the Pendle parishes of Reedley Hallows, Old Laund Booth and Nelson, the Burnley parish of Briercliffe, and the unparished area of the town of Burnley.

The building of the Leeds and Liverpool Canal, the Blackburn to Addingham turnpike road and the railway from Preston to Colne led to the town developing during the early 19th century.

Before the new transport links were constructed, the town was just a scattering of farmhouses forming part of the township of Little Marsden, which also covered a large part of what was to become Nelson. The construction of the first cotton mill in 1832 off Lob Lane (now Clitheroe Road) close to the Marsden coal pit, led to the massive growth of the settlement during the mid-19th century.

New mills were established along the banks of the canal and people flocked to the area to work in the cotton industry, many coming from the lead mining areas of the North Riding of Yorkshire as the lead seams were worked out.

In July 1997, the town's small cinema, Unit Four, closed down. It was showing Batman and Robin, The Fifth Element, Con Air, and Beavis and Butt-Head Do America. It was later replaced by an branch of Dixy Chicken, as well as Maria’s World Food Store.

The cotton industry continued to be the main employer until well into the 1960s, and in 2006 that BSN (formerly Smith & Nephew) ceased production of woven cloth at Brierfield Mills. After years of disuse, Pendle Council purchased the mills in 2012, intending to use it as a flagship regeneration project.

The town's war memorial features a large roaring bronze lion. The town is known for its part in the Quaker movement. A Friends meeting house is still in use on the south-eastern boundary of the town, and the bridge over Pendle Water at the foot of the town is called Quaker Bridge.

The town is served by Brierfield railway station.

Pendle Community Radio commenced broadcasting on 103.1FM in September 2005. Licensed by Ofcom as a distinct community radio service, it aims to target the borough's Muslim population, a large number of which reside in Brierfield. 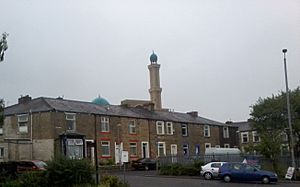 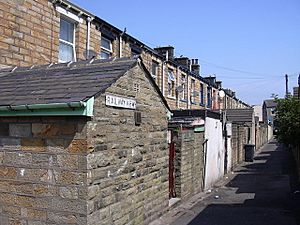 All content from Kiddle encyclopedia articles (including the article images and facts) can be freely used under Attribution-ShareAlike license, unless stated otherwise. Cite this article:
Brierfield, Lancashire Facts for Kids. Kiddle Encyclopedia.