Haslingden is a town in Rossendale, Lancashire, England. It is 19 miles (31 km) north of Manchester. The name means 'valley of the hazels'. At the time of the 2001 census the town had a population of 16,849.

Haslingden is the birthplace of the industrialist John Cockerill (1790–1840) and the composer Alan Rawsthorne (1905–1971), and was the home for many years of the Irish Republican leader, Michael Davitt (1846–1906). Haslingden Cricket Club is a member of the Lancashire League. 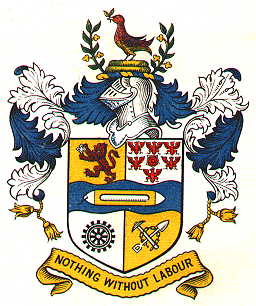 Part of what is now Haslingden, along with that of the neighbouring towns of Rawtenstall and beyond that Bacup were part of the Forest of Blackburnshire, that part being the Forest of Rossendale. The Forest was a hunting park during the late 13th and 14th centuries; 'Forest' referred to it being parkland rather than being heavily wooded, as the forest declined much earlier, during the Neolithic period.

Haslingden grew from a market town (a market was established in 1676) and later a coaching station to a significant industrial borough during the period of the Industrial Revolution. In particular with the mechanisation of the wool and cotton spinning and weaving industries from the 18th to the 19th centuries, and with the development of watermills, and later steam power.

Haslingden is notable for its stone quarrying, and Haslingden Flag (a quartz-based sandstone) was exported throughout the country in the 19th century with the opening up of the rail network. It was used in the paving of London, including Trafalgar Square.

Flagstone is a type of sedimentary rock, relatively easy to split or quarry in slabs, and hence ideal for paving. Locally it is also used for making fences and roofing. There are Upper and Lower Haslingden Flagstones and the name is given to layers of the stone that appear throughout the area (not only in Haslingden) although the most spectacular examples are in the Rossendale valley.

From 1950 onwards migrants were encouraged to travel from Commonwealth countries to work in the post-war textile industry. As a result Haslingden is now home to a substantial and vibrant community of people from a South Asian heritage, mainly Bangladeshi and Pakistani. The town houses two mosques and a considerable number of Asian grocers and other shops.

Haslingden's Anglican parish church, St. James', was built in the 18th century on a site occupied by a church building since at least 1284. In that year a deed of gift of the Earl of Lincoln to the monks of Stanlaw granted them the parish of Whalley. The church is considered to be the highest parish church above sea level in England. When they later took possession and had a valuation of its assets done, they recorded at Haslingden one of the parish's seven independent chapelries. Beside the Memorial Gardens, the Manchester Road Methodist Church is a classic building with an Italian-inspired interior.

The Public Hall was opened in 1868 and built by a private company formed by 'gentlemen representing the working classes and temperance movement'. It was bought by the town council in 1898 but is now largely unused. Used for 50 or more years by Rossendale Amateur Operatic Society, and other local groups, the hall was closed by Rossendale Council in 2005 after an audit commission found them to be the worst council in the country and this was shown in the published league tables of the time. The hall has since been sold by the council to a group representing the Asian heritage community and is in the process of being turned into a mosque (2009/ 2010). The public hall was once a venue of Winston Churchill during his early political career. Emmeline Pankhurst once addressed the people of Haslingden from the stage and, after the Battle of the Somme in 1916, it was a temporary hospital for the survivors of the Accrington Pals who were sent home for treatment.

The Wesleyan School formerly on the site of the current health centre was the first site in the world to introduce standardised intelligence tests for five- to six-year-olds. Haslingden High School is a specialist arts,maths and computing college. Haslingden Primary School was last inspected by Ofsted on 11 March 2014 and received a grading of 'Good'.

Originally Haslingden Mechanics' Institute and opened in 1860, it became the public library in 1905. A blue plaque commemorates Michael Davitt. The young Davitt migrated to Haslingden with his family in 1840 as a result of the family being evicted from their tenant farm by cruel a British Landlord. He began working in a cotton mill but at the age of 11 his right arm was entangled in a cogwheel and mangled so badly it had to be amputated. When he recovered from his operation a local benefactor, John Dean, helped to give him an education. He also started night classes at the Mechanics' Institute and used its library. Michael Davitt's family home from 1867–1870 on Wilkinson Street is now marked by a memorial plaque.

Haslingden was once connected to Accrington and Bury by railway (Rush, 1983). The East Lancashire Railway built a station here, which remained open to passengers under British Railways until 7 November 1960 and to goods until 2 November 1964. The withdrawal of the passenger service was therefore not a victim of Dr. Beeching. The Bury – Accrington line itself remained in use until December 1966. Much of the trackbed of the railway is no longer visible, with the A56 by-pass built over it between Grane Road and Blackburn Road, however, the line can still be traced through Helmshore towards Stubbins where several magnificent viaducts still remain. The East Lancashire Railway Preservation Society was originally established at Helmshore Station in the mid 1960s with the aim of reopening the railway line to Stubbins, the project was abandoned with the organisation relocating to Bury in the 1970s and eventually reopening the Rawtenstall to Bury line.

The town centre is home to the famous Big Lamp originally erected in 1841 and from where all distances in Haslingden are measured, although the original lamp has been replaced by a replica, the original being lost after being taken to America. Cissy Green's Bakery can be found on Deardengate. People visit from across Lancashire to sample the handmade pies which are still made to the original 1920s recipe.To the north of the town is the Holland's Pies factory, and Winfield's, a large warehouse-style retail development selling footwear and clothing, and promoting itself as a family day out. Haslingden's War Memorial is unusual in that it has no names recorded on it. To the northeast there is a 2 kW digital television transmitter serving a wide area. 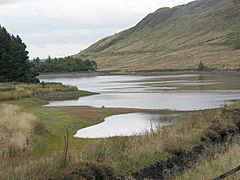 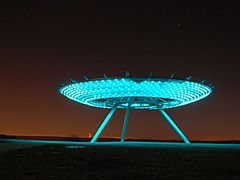 There is an extensive area of moorland to the west of Haslingden. These moors are divided into Oswaldtwistle Moor and Haslingden Moor. The area forms part of the West Pennine Moors. Plans were made in 2007 to build a wind farm consisting of twelve wind turbines on the moors. This attracted both support and opposition, but the plan was approved by councillors in 2010. Further developments have yet to take place, and the plan remains controversial.

The nearby Snighole (eel-hole) in Helmshore is a well-known beauty spot. The Grane Valley including three reservoirs to the west of the town is popular with walkers.

Victoria Park has a bowling green, children's playground, skateboard park and ball court. The top of the park affords views of Musbury Hill.

The Panopticons competition was launched in May 2003 by RIBA Competitions. The Halo artwork designed by John Kennedy was selected and opened in 2007 and is sited in the hills above Haslingden as the centrepiece of a reclaimed landscape. It glows at night and is an unusual landmark, with an impressive viewpoint.

All content from Kiddle encyclopedia articles (including the article images and facts) can be freely used under Attribution-ShareAlike license, unless stated otherwise. Cite this article:
Haslingden Facts for Kids. Kiddle Encyclopedia.