Bacup is a town in Lancashire, England, in the South Pennines close to Lancashire's boundary with West Yorkshire. The town is in the Forest of Rossendale and the upper Irwell Valley, 3.5 miles (5.6 km) east of Rawtenstall, 6.4 miles (10.3 km) north of Rochdale, and 21 miles (34 km) east of Preston. At the 2011 Census, Bacup had a population of 13,323.

Bacup emerged as a settlement following the Anglo-Saxon settlement of Britain in the Early Middle Ages. For centuries, it was a small and obscure centre of domestic flannel and woollen cloth production, and many of the original weavers' cottages survive today as listed buildings. Following the Industrial Revolution, Bacup became a mill town, growing up around the now covered over bridge crossing the River Irwell and the North-South / East-West crossroad at its centre. During that time its landscape became dominated by distinctive and large rectangular woollen and cotton mills. Bacup received a charter of incorporation in 1882, giving it municipal borough status and its own elected town government, consisting of a mayor, aldermen and councillors to oversee local affairs.

In the late 20th century, Bacup became part of the borough of Rossendale. Bacup's historic character, culture and festivities have encouraged the town's suburbanisation and redevelopment as a more cosmopolitan commuter town for Manchester and other North West towns and cities, whilst English Heritage has proclaimed Bacup as the best preserved cotton town in England, and its town centre is designated as a conservation area for its special architectural qualities.

The name Bacup is derived from the Old English fūlbæchop. The Oxford Dictionary of British Place Names translates this as "muddy valley by a ridge"; the fūl- element, which meant "foul" or "muddy" was used in the earliest known reference to the area, in a charter by Robert de Lacey, around the year 1200, as used in the Middle English spelling fulebachope. The prefix ful- was dropped from the toponym. The -bæchop element is less clear, possibly meaning "ridge valley", or else "back valley" referring to the locale's position at the back part of the Irwell Valley.

Bacup and its hinterland has provided archeological evidence of human activity in the area during the Neolithic. Anglo-Saxons settled in the Early Middle Ages. It has been claimed that in the 10th century the Anglo-Saxons battled against Gaels and Norsemen at Broadclough, a village to the north of Bacup. From the medieval period in this area, the River Irwell separated the ancient parishes of Whalley and Rochdale (in the hundreds of Blackburn and Salford respectively). The settlement developed mainly in the Whalley township of Newchurch but extending into Rochdale's Spotland.

The geology and topography of the village lent itself to urbanisation and domestic industries; primitive weavers' cottages, coal pits and stonequarries were propelled by Bacup's natural supply of water power in the Early Modern period. The adoption of the factory system, which developed into the Industrial Revolution, enabled the transformation of Bacup from a small rural village into a mill town, populated by an influx of families attracted by Bacup's cotton mills, civic amenities and regional railway network. Locally sourced coal provided the fuel for industrial scale quarrying, cotton spinning and shoe making operations, stimulating the local economy. Bacup received a charter of incorporation in 1882, giving it honorific borough status and its own elected town government, consisting of a mayor, aldermen and councillors to oversee local affairs.

Bacup's boom in textile manufacture during the Industrial Revolution resulted in the town developing into a prosperous and thickly populated industrial area by early-20th century. But the Great Depression and the ensuing deindustrialisation of the United Kingdom largely eliminated Bacup's textile processing sector and economic prosperity.

Bacup followed the regional and national trend of deindustrialisation during the early and mid-20th century; a process exacerbated by the closure of Bacup railway station in 1966. Bacup also experienced population decline; from 22,000 at the time of the United Kingdom Census 1911, to 15,000 at the United Kingdom Census 1971. Much of Bacup's infrastructure became derelict owing to urban decay, despite regeneration schemes and government funding. Shops became empty and others appeared tatty or downmarket. The houses along the main roads endured as the original terraces from Bacup's industrial age, but behind these, on the hillsides, are several council estates. 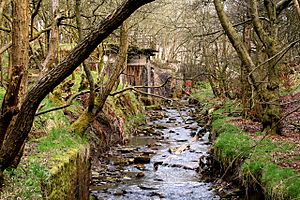 The River Irwell at Weir in the rural north of Bacup

On the moor to the south is Lee Quarry, a council funded mountain bike trail.

Bacup is surrounded by open moor and grassland on all sides with the exception of Stacksteads at the west which forms a continuous urban area with Waterfoot and Rawtenstall. The major towns of Burnley and Accrington are to the north and northwest respectively; Todmorden, Walsden and the county of West Yorkshire are to the east; Rochdale and the county of Greater Manchester are to the south; Rawtenstall, from where Bacup is governed, is to the west. Areas and suburbs of Bacup include Britannia, Broadclough, Deerplay, Dulesgate, Stacksteads and Weir.

Bacup experiences a temperate maritime climate, like much of the British Isles, with relatively cool summers, yet harsh winters. There is regular but generally light precipitation throughout the year.

English Heritage, a public body responsible for the management and maintenance of England's significant historical architecture and archaeology, has proclaimed Bacup as the best preserved cotton town in England; the town centre has been designated a Conservation Area of Special Architectural and Historic Interest. The majority of Bacup's culturally significant architecture is in the Victorian period, but there are older buildings of note are Fearns Hall (1696), Forest House (1815) and the 18th century Stubbylee Hall. The Bacup Natural History Society Museum was formed in 1878.

Bacup is home to the 17 ft (5.2 m) long Elgin Street which held the record as the shortest street in the world until November 2006, when it was surpassed by Ebenezer Place, in the Scottish Highlands.

Many of the town's historic buildings are set to be renewed in a £2m regeneration scheme. 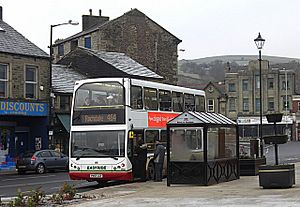 Bacup railway station was opened in 1852 by the East Lancashire Railway as the terminus of the Rossendale line. The Rochdale and Facit Railway was extended to Bacup in 1883. It rose over a summit of 967 feet (295 m) between Britannia and Shawforth. The Rochdale line closed to passenger services in 1947, and the station finally closed in December 1966, with the cessation of all passenger services to and from Manchester Victoria via Rawtenstall and Bury.

In June 2014 the police announced they would be monitoring the road between Weir and Bacup (which passes through Broadclough) as it has become an accident blackspot with a high number of accidents which have resulted in serious injury and even deaths.

There have been a large number of road traffic incidents on the A671 as it passes through the small hamlets of Broadclough and Weir near Bacup including fatalities. Currently police are monitoring the road and there have been calls from local residents, led by County Councillor Jimmy Easton, for the creation of a bypass with the suggestion of utilising elements of the old highway Bacup Old Road. 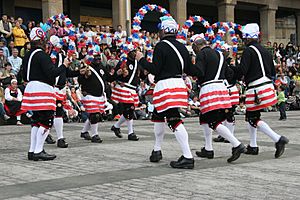 The Britannia Coconut Dancers are an English folk dance troupe based in Bacup.

The key date in Bacup's cultural calendar is Easter Saturday, when the Britannia Coco-nut Dancers beat the bounds of the town via a dance procession. Britannia Coconut Dancers are an English country dance troupe from Bacup whose routines are steeped in local folk tradition. They wear distinctive costumes and have a custom of blackening their faces. The origin of the troupe is claimed to have its roots in Moorish, pagan, medieval, mining and Cornish customs. The Easter Saturday procession begins annually at the Traveller's Rest Public House on the A671 road. The dancers are accompanied by members of Stacksteads Silver Band and proceed to dance their way through the streets.

Bacup Museum is local history hub and exhibition centre in Bacup. The Bacup Natural History Society was formed in 1878. The work of the society is carried out by a group of volunteers who have a base in the Bacup Museum which contains an idiosyncratic collection.

Bacup has been used as a filming location for the 1980s BBC TV police drama Juliet Bravo, Hetty Wainthropp Investigates, parts of The League of Gentlemen and much of the film Girls' Night. Elements of the BBC TV drama Oranges Are Not the Only Fruit were also filmed on location in Bacup. The famous 1961 British film Whistle Down the Wind starring Hayley Mills used various parts of Bacup for filming also.

Stacksteads is home to the World Gravy Wrestling Championships held on the late August bank holiday.

All content from Kiddle encyclopedia articles (including the article images and facts) can be freely used under Attribution-ShareAlike license, unless stated otherwise. Cite this article:
Bacup Facts for Kids. Kiddle Encyclopedia.