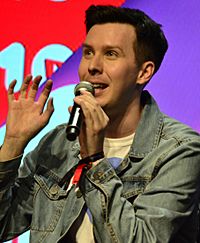 Philip Michael Lester (born 30 January 1987) is an English YouTuber and presenter. He is best known for his YouTube channels AmazingPhil, which has over 4 million subscribers, and DanAndPhilGAMES.

Together with friend Daniel Howell, Lester presented Sunday night entertainment show Dan and Phil (radio show) on BBC Radio 1 from January 2013 until August 2014, and from September 2014 to April 2016.

Lester was born in Rawtenstall, Rossendale, Lancashire. He is openly gay.

All content from Kiddle encyclopedia articles (including the article images and facts) can be freely used under Attribution-ShareAlike license, unless stated otherwise. Cite this article:
Phil Lester Facts for Kids. Kiddle Encyclopedia.