Clifton is a suburb of Swinton in the City of Salford in Greater Manchester, England. It lies along the edge of Irwell Valley in the north of the City of Salford. Historically in Lancashire, it was a centre for coal mining, and once formed part of the Municipal Borough of Swinton and Pendlebury.

Clifton is derived from the Old English clif and tun, and means the "settlement near a cliff, slope or riverbank". Clifton was mentioned in the Pipe Roll of 1183–84.

Clifton Hall Colliery was situated a few yards to the west of Lumns Lane on a site currently occupied by a domestic refuse and recycling site, run by the Greater Manchester Waste Disposal Authority. It is thought that the colliery was operating by 1820, and its tramway is shown on a parliamentary plan from 1830 and an 1845 map. The colliery closed in 1929.

On 18 June 1885, an underground explosion at the colliery killed 178 men and boys. It is thought the explosion was caused by firedamp igniting on contact with a candle. Blacksmith George Hindley (aged 16) and fireman George Higson, were part of a band of men who descended into the mine immediately after the explosion. They received an Albert Medal (2nd class) in recognition of their heroism.

Wet Earth Colliery was another early coal pit located in Clifton. Having closed in 1928, its remains can still be seen in Clifton Country Park, very close to the River Irwell, the Manchester-Preston railway line, and near the bottom of Clifton House Road which runs uphill from the valley to its junction at the top with the A666, Manchester Road just opposite Clifton Cricket Ground.

Clifton lies five miles north west of Manchester on the A666 road (Manchester Road) to Bolton. The township covered 850 acres in the valley of the River Irwell, which forms the north east boundary. The Manchester-Preston railway line passes through and there was a junction with the line to Bury and Rossendale which opened to Rawtenstall in September 1846. The highest land rises to over 300 feet above sea level in the west of the township near the Worsley boundary and is moss land. The underlying rocks are New Red Sandstone between Clifton and Ringley while the rest of the township lies on the Middle Coal Measures of the Manchester Coalfield. Much of Clifton's boundary with Pendlebury is defined by Slack Brook which flows eventually into the Irwell not far from where Agecroft Power Station once stood. Slack Brook has been largely culverted for many years under landfill tipping since the 1950s.

Clifton is served by Clifton railway station on the Ribble Valley Line. In earlier times, the station was known as "Clifton Junction" from its location at the junction of the Manchester and Bolton Railway and Manchester, Bury and Rossendale Railway lines. The Bury line left the station/junction and passed over Clifton Viaduct, known locally as "the thirteen arches", across the Irwell Valley. Clifton Junction was important in bringing workers to the three large factories in the area, Magnesium Elektron Ltd (M.E.L.), Chloride Batteries and Pilkington's Tiles. The Manchester, Bolton and Bury Canal passed through Clifton. The Clifton Aqueduct carried the canal across the River Irwell. and is preserved as a Grade II listed building. There are plans to restore the canal for leisure use at a cost of over £50M. 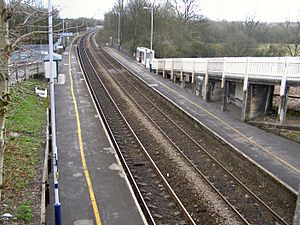 There are currently three public houses within Clifton. These are the Oddfellows Arms, the Goldon Lion and the Robin Hood, all along the same side of Manchester Road. On Rake Lane, at the junction with Queensway, stands the Holyrood nursery which was until recent times, the Beehive public house.

The British Army's Territorial Army Centre is located on Manchester Road very close to junction 16 of the M60 motorway. It is known locally by its informal title of "Clifton Barracks".

Clifton Cricket Club plays in the Central Lancashire Cricket League. However has recently transferred over to the newly established Greater Manchester Cricket League. The club's ground is on Manchester Road not far from junction 16 of the M60 motorway.

Queensmere Dam off Queensway is leased from the Forestry Commission by Swinton and Pendlebury Anglers. Queensway was only built (across what was farmland) in the early 1960s to directly link much of Rake Lane and Lumns Lane (at the former Bee Hive public house - now Holyrood private nursery) with Bolton Road (A666), Pendlebury at its junction with Station Road (B5231) instead of having to use nearby Billy Lane. Before this, Queensmere Dam was known locally as simply "the Dam".

Clifton has two primary schools and a pupil referral unit within its boundaries:

All content from Kiddle encyclopedia articles (including the article images and facts) can be freely used under Attribution-ShareAlike license, unless stated otherwise. Cite this article:
Clifton, Greater Manchester Facts for Kids. Kiddle Encyclopedia.