Swinton is a town in the City of Salford in Greater Manchester, England. southwest of the River Irwell, 4.2 miles (6.8 km) northwest of Manchester city centre, adjoining the town of Pendlebury and suburb of Clifton. In 2014, it had a population of 22,931.

Historically in Lancashire, for centuries Swinton was a small hamlet in the township of Worsley, parish of Eccles and hundred of Salfordshire. The name Swinton is derived from the Old English "Swynton" meaning "swine town". In the High Middle Ages, Swinton was held by the religious orders of the Knights Hospitaller and Whalley Abbey. Farming was the main industry, with locals supplementing their incomes by hand-loom woollen weaving in the domestic system.

Collieries opened in the Industrial Revolution and Swinton became an important industrial area with coal providing the fuel for the cotton spinning and brickmaking industries. Bricks from Swinton were used for industrial projects including the Bridgewater Canal, which passes Swinton to the south. The adoption of the factory system facilitated a process of unplanned urbanisation in the area, and by the mid-19th century Swinton was an important mill town and coal mining district at a convergence of factories, brickworks and a newly constructed road and railway network.

Following the Local Government Act 1894, Swinton was united with neighbouring Pendlebury to become an urban district of Lancashire. Swinton and Pendlebury received a charter of incorporation in 1934, giving it honorific borough status. In the same year, the United Kingdom's first purpose-built intercity highway—the major A580 road (East Lancashire Road), which terminates at Swinton and Pendlebury's southern boundary—was officially opened by King George V. Swinton and Pendlebury became part of the City of Salford in 1974. Swinton is the seat of Salford City Council and a commuter town, supported by its transport network and proximity to Manchester city centre.

The name Swinton derives from the Old English swin, pigs and tun, an enclosure, farmstead or manor estate. An early form was Swynton.

During the Middle Ages, Swinton belonged to Whalley Abbey. Later, lands at Swinton were granted to Thurston Tyldesley, then of Wardley Hall. Documents record that certain areas belonged to the Knights Hospitaller.

In 1817 some Swinton weavers joined in the Blanketeers' demonstration and marched to London to put their grievances to the Prince Regent. In 1842 some Swinton people took part in Chartist agitations and tried to destroy a local colliery.

Sunday schools and libraries were established in Swinton at quite an early period. The Swinton Industrial School was visited by Charles Dickens. The school was created by the Manchester Poor Law Union. In contrast with other institutions for the poor around that time, which were places of final resort, the Swinton Industrial School was built in response to a more enlightened attitude. The Manchester Poor Law Union saw the value of a place where children could be cared for and educated. The school opened in 1843 and survived until the 1920s. During demolition of the school buildings in the early 1930s, the foundations proved particularly difficult. Finally explosives were used, which resulted in a huge number of rats being disturbed. It was a number of weeks before council workers could remove the rats from the surrounding streets and houses. Huge nests of baby rats were carried out of the rafters of many buildings. The site was used for the present town hall. 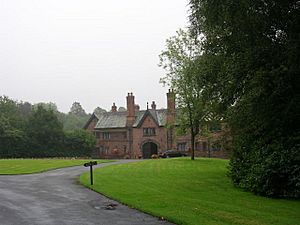 The architectural centrepiece of the town is the neoclassical Salford Civic Centre, which has a 125-foot (38 m) high clock tower. It was built as Swinton and Pendlebury Town Hall, when Swinton and Pendlebury received its Charter of Incorporation. Before its construction, council meetings were held in Victoria House in Victoria Park, but the borough council required larger premises. A competition was launched to design the new town hall; the winners were architects Percy Thomas and Ernest Prestwich with a design that closely resembled Swansea Guildhall. It later won the RIBA Gold Medal.

The site of the former Swinton Industrial School on Chorley Road was purchased for £12,500 and the foundation stone of the new town hall laid on 17 October 1936. The main builders were J. Gerrard's and Son of Pendlebury. The town hall opened on 17 September 1938. Extensions were built when it became the administrative headquarters of the City of Salford in 1974.

Wardley Hall is an early medieval manor house and a Grade I listed building, and is the official residence of the Roman Catholic bishops of Salford. 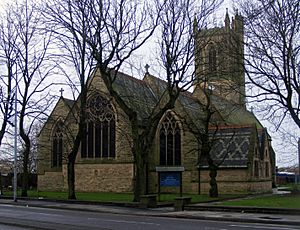 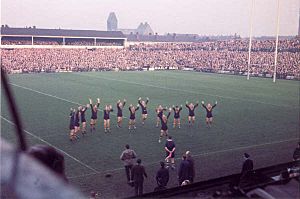 Swinton RLFC has an impressive record in rugby league considering the size of the town. The club's six Championship and three Challenge Cup wins is better than the record of their local rivals Salford RLFC. The club was based just over the local boundary in Pendlebury until 1992, when financial mismanagement necessitated a move from the Station Road ground to play at Gigg Lane in Bury. The financial failure of main creditor and de facto owner Hugh Eaves in 2002 put the future of the club in jeopardy and it spent a short time regrouping at Moor Lane in Kersal, as tenants of Salford City F.C. From 2003, the Lions played home games at Park Lane, Whitefield, home of Sedgley Park RUFC. In 2006, the club acquired land to build a 6,000 capacity stadium with training facilities and community use in Agecroft, Pendlebury. After ground-sharing with Leigh and Salford, the club moved to Heywood Road, Sale, home of Sale Rugby Union F.C. for the 2016 season onwards.

Swinton based junior association football side Deans F.C. was the starting point in the career of Ryan Giggs, who grew up in neighbouring Pendlebury and went on to become a Manchester United player, and also of Dean Holden.

Composer Sir Peter Maxwell Davies, previously Master of the Queen's Music, was brought up in Swinton after his family moved from Salford when he was four. In 1998, he wrote Swinton Jig, an orchestral work inspired by the sounds and traditional melodies heard in Swinton during his childhood.

The composer and pianist Roger Smalley was born in Swinton in 1943.

All content from Kiddle encyclopedia articles (including the article images and facts) can be freely used under Attribution-ShareAlike license, unless stated otherwise. Cite this article:
Swinton, Greater Manchester Facts for Kids. Kiddle Encyclopedia.