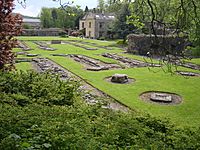 The remains of Whalley Abbey church

Whalley Abbey is a former Cistercian abbey in Whalley, Lancashire, England. After the dissolution of the monasteries, the abbey was largely demolished and a country house was built on the site. In the 20th century the house was modified and it is now the Retreat and Conference House of the Diocese of Blackburn. The ruins of the abbey are recorded in the National Heritage List for England as a designated Grade I listed building, and are a Scheduled Ancient Monument.

In 1296 the Cistercian monks from Stanlow Abbey moved to Whalley. Stanlow Abbey had been founded on the banks of the River Mersey in the 1170s by John fitz Richard, the constable of Chester. This abbey had suffered a series of misfortunes, including flooding in 1279, the destruction of the church tower in a gale in 1287 and a fire in 1289. In 1283 Henry de Lacy, tenth Baron of Halton agreed to the move from Stanlow to Whalley but this was not achieved until 1296. The first stone was laid by Henry de Lacy in June 1296 and at least part of the site was consecrated by the Bishop of Whithern in 1306. Building proceeded slowly and the foundation stone was laid in 1330. Stone for building the abbey was obtained from quarries at Read and Simonstone. A royal licence to build a crenellated wall around the site was obtained in 1339. The church was completed in 1380 but the remainder of the abbey was not finished until the 1440s. In 1480 the North East Gatehouse, which provided a new entrance to the abbey, was completed. In the 16th century, John Paslew, the last Abbot of Whalley, reconstructed his own lodgings and added a Lady Chapel. The abbey closed in 1537 as part of the dissolution of the monasteries. Also that year Abbot Paslew was executed for high treason for his part in events connected with the Pilgrimage of Grace the previous year.

In 1553 the abbey lands and the manor of Whalley were sold for just over £2,151 to John Braddyll of Brockhall and Richard Assheton of Lever near Bolton. The properties were divided and Assheton took the monastic site and buildings. The abbot's house and the infirmary buildings were demolished and a large house was built on the site. In the 17th century most of the remaining church and monastic buildings were pulled down. The house passed through a succession of owners and further alterations were made to it in the 19th century. Around 1900 the house and grounds were bought by Sir John Travis Cragg.

In 1923 the house and grounds were purchased by the Anglican Diocese of Manchester when the bishop was William Temple. When the diocese was divided in 1926, the property passed to the new Diocese of Blackburn. In 1930 Canon J. R. Lumb was appointed as the first warden of the centre and it has since become a centre of religious education with residential accommodation for guests. Two of the ground floor rooms have been converted into chapels. In the 1930s the site of the abbey church was excavated and the foundations discovered were exposed and consolidated.

The former private house, which is now a retreat and conference house, was reopened in September 2005 following refurbishment. It contains conference rooms, a dining room and en suite rooms for residents. The north range contains a visitor centre, with a coffee shop, exhibition centre and a bookshop. A spirituality programme is available for resident and non-resident guests. Guided tours of the abbey ruins can be arranged in the summer months.

All content from Kiddle encyclopedia articles (including the article images and facts) can be freely used under Attribution-ShareAlike license, unless stated otherwise. Cite this article:
Whalley Abbey Facts for Kids. Kiddle Encyclopedia.