Historically in Lancashire, Pendlebury together with the neighbouring settlements of Swinton and Clifton, formed the municipal borough of Swinton and Pendlebury. A centre for coal mining for many years, Pendlebury saw extensive coal extraction from several collieries until the closure of Agecroft Colliery in the 1990s.

In 1199 King John confirmed a gift of a carucate of land called Peneberi to Ellis son of Robert. He had made the grant when he was Earl of Mortain (1189–99) and confirmed it when he became king in a deed signed at Le Mans in France. Ellis was described as Master Sergeant of Salford and a benefactor of Cockersand Abbey.

In 1201 Pendlebury was linked to the manor of Shoresworth to the south (described as "one oxgang of land") before Shoreworth became part of Pendleton. The manors of Pendlebury and Shoresworth were held of the king in thegnage by a rent of 12 shillings in 1212. Ellis died in or about 1216, and his son Adam succeeded to his manor and serjeanty. In 1274 Ellis, son of Roger came to a violent death, and Amabel, his widow claimed dower in various lands against Roger de Pendlebury. A short time afterwards, Amabel having received her dower, she and Roger de Pendlebury had to defend a suit brought by Adam de Pendlebury, who satisfied the jury of his title to the manor. Ellis had a brother, William and daughters Maud, Lettice and Beatrice. Maud married Adam son of Alexander de Pilkington of Pilkington, and had a daughter Cecily. The manor was sold before 1300 to Adam de Prestwich. The new lord of Pendlebury married Alice de Woolley daughter of Richard son of Henry de Pontefract, the eventual heir was his daughter Alice, wife of Jordan de Tetlow. Her heir was her daughter, Joan, who married Richard de Langley, and the manor descended with the Langleys until the end of the 16th century. Robert Langley died 19 September 1561, leaving four daughters as co-heirs. On the division of the estates, Agecroft, and lands in Pendlebury, became the portion of Anne, who married William Dauntesey, from Wiltshire. The manor of Pendlebury was claimed by the Daunteseys for some time, but was afterwards held with Prestwich, descending in the Coke family until about 1780, when it was sold to Peter Drinkwater of Irwell House, Prestwich.

Agecroft Hall, the Tudor home of the Lord of the Manor of Pendlebury, stood on rising ground on the west side of the River Irwell, where it flows southwards towards Salford and Manchester between the high ground of Kersal and Prestwich to the east and north, and Irlams o' th' Height and Pendlebury on the west. Building probably began towards the end of the reign of Henry VII. In 1666, of the thirty-five hearths liable for tax in Pendlebury, Agecroft Hall the only large house had eleven hearths.

At the end of the 19th century, industrialisation swept through the Irwell Valley. Collieries were sunk around Agecroft Hall, railway tracks cut across the manor and a dirty lake formed on the edge of the estate. The house fell into disrepair and was sold at auction in 1925 to Mr and Mrs Thomas C Williams. The structure was dismantled, crated, shipped across the Atlantic, and painstakingly reassembled in Windsor Farms, Richmond, Virginia, USA. Agecroft Hall is re-created as a tourist attraction on the banks of the James River, in a setting chosen to be reminiscent of its original site at Agecroft near the River Irwell. 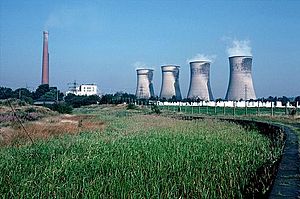 Pendlebury saw extensive coal extraction until the closure of Agecroft Colliery in the 1990s. The Wheatsheaf Colliery was on Bolton Road between Carrington Street and City Walk on what is now the Wheatsheaf Industrial Estate and Newtown Colliery (on the Clifton/Newtown, Pendlebury boundary, bounded by Manchester Road/Bolton Road (A666), Billy Lane, Rake Lane and the pit lodge, which later became known as "Queensmere"). Agecroft Colliery reopened in 1960 following an investment of £9,000,000 and seven years of establishment works, making it the first new pit to be sunk in Lancashire since the Second World War. high and which was abandoned in 1932. After 1947 Agecroft Colliery sent much of its coal to the CEGB's Agecroft Power Station, via a conveyor belt system that crossed a bridge over Agecroft Road. Mining finished in 1990, and the Agecroft Colliery site is now home to the Agecroft Commerce Park.

The Kearsley, Clifton, Pendlebury and Pendleton Miners' Association was established in 1888 and became the Pendlebury Branch of the National Union of Mineworkers in 1959. With the decline of the industry, the once popular Pendlebury Miners' Club (at the top of Temple Drive, Swinton) was inevitably demolished in the 1990s.

Pendlebury is situated on a ridge overlooking the lower Irwell Valley, almost midway between Manchester and Bolton and is neighboured by Irlams o' th' Height, Pendleton and Clifton. The surface of the land slopes generally upwards from southwest (Swinton) to northeast (Irwell Valley), from about 120 feet (37 m) to nearly 300 feet (91 m) above the ordnance datum. However, the topography of the land around Lumn's Lane has changed due to the dumping of mining waste from the former collieries and the area has been used as a landfill site by the Greater Manchester Waste Disposal Authority since 1982, taking ten percent of Greater Manchester's waste each year.

The town has a mix of industrial and residential areas despite the closure of its mines and most of its cotton mills.

Pendlebury is the starting point of the A666 (Bolton Road) road which runs through the district from its junction with the A6/A580 at the Pendlebury/Irlams o' th' Height boundary. It was the main route between Manchester and Bolton before the opening of the M61 motorway.

The Manchester, Bolton and Bury Canal opened in 1809 and during the 19th and early 20th century provided the main means of transporting the coal from the collieries, many of which set up tramway links to the canal. Coal was taken to Bolton, Bury, Radcliffe and Salford, and across the River Irwell to Manchester. In 1905 over half a million tons of coal a year was carried. Lengths of the canal subsided due to mining subsidence; maps from 1881–82 show areas of coal under the canal were bought by the canal company to safeguard it from subsidence. The canal became disused after 1924 and closed in 1961, though coal was still carried for a short distance to Bury until 1968. A canal restoration society was founded in 1987 and persuaded Bury, Bolton and Salford councils to protect the line of the canal from development – restoration was announced by British Waterways in 2002.

Pendlebury was served by Pendlebury railway station on the Manchester Victoria to Wigan line for over 80 years, until its closure on Saturday 1 October 1960 by British Railways due to low usage. Irlams o' th' Height station in the eastern extremity of the borough was closed for similar reasons five years earlier. Swinton railway station is located in Pendlebury.

Pendlebury was on a line between Patricroft on the Manchester to Liverpool line and Clifton Junction until the Black Harry Tunnel collapse of 1953 which caused five deaths when two houses from Temple Drive, Swinton collapsed into the void – the line never reopened and much of its length is now a recreational footpath.

The 45-acre (18 ha) Northern or Agecroft Cemetery opened on 2 July 1903 by the County Borough of Salford (outside its boundaries) on the flood plain between Langley Road and the River Irwell by the border with Kersal. A crematorium was opened in the nonconformist burial chapel in 1957. A fund has been launched, supported by the council and external partners, to restore the unused central burial chapel which has fallen into a state of disrepair. 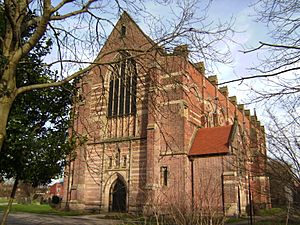 The architectural highlight of the town is the Grade I listed Gothic style High Anglican St Augustine's Church, designed by the 19th century architect George Frederick Bodley between 1871 and 1874 and widely acknowledged as his finest work. It is one of six Grade I listed buildings in the City of Salford. The church became known as the miners' cathedral because of its lofty appearance and because many local men were colliers. The churchyard contains a memorial to 178 men and boys who died in a disaster at Clifton Hall Colliery on 18 June 1885. Sixty-four victims are buried at St Augustine's. In May 2006, the church became the focal point of a campaign by English Heritage to save 19 places of worship in Greater Manchester from falling into dilapidation.

The Royal Manchester Children's Hospital built in 1873 closed in 2009 and its functions moved to a site alongside Manchester Royal Infirmary, in Manchester. 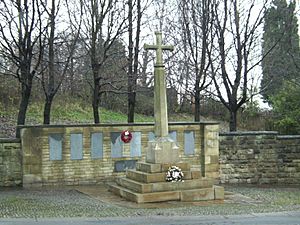 At the junction of Bolton Road and Agecroft Road stands a stone cross with the inscription "Lest We Forget". Behind it is a stone wall on which is written:

"This cross was erected by Andrew Knowles and Sons to the memory of the brave men from their collieries who laid down their lives for their country A.D. 1914–1918"

Below the inscription are eight slate plaques inscribed with the names of 24 men who worked for Andrew Knowles and Sons.

All content from Kiddle encyclopedia articles (including the article images and facts) can be freely used under Attribution-ShareAlike license, unless stated otherwise. Cite this article:
Pendlebury Facts for Kids. Kiddle Encyclopedia.