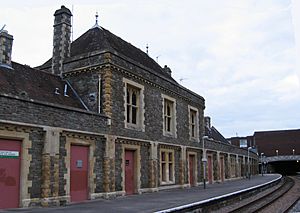 Clifton Down railway station, which is located in the Clifton East ward.

Clifton East is one of the thirty-five council wards in Bristol, England. As the name suggests, the ward covers the eastern part of the Clifton area of Bristol.

Clifton East has a large number of students living in the area. 30% of the population is aged 20–24, compared with a national average of 9%.

Notable places in the Clifton East ward include Clifton Down railway station and Clifton Pool and The Victoria Public House.

Running down the length of the ward is Whiteladies Road, which includes many shops and offices, as well as some houses. The property numbering is unusual in that even numbers are on the left, and odds on the right, heading out from the city centre, contrary to usual practice. The ABC Cinema on Whiteladies Road was converted into offices and gymnasium in the 1990s but there are now plans to re-open it as a cinema. Just off Whiteladies Road, the Clifton Lido was built in 1850 but closed to the public in 1990; it was redeveloped and opened again to the public in November 2008.

Bristol City Council changed the layout of Whiteladies Road in 2011–12, affecting traffic and pedestrians and causing controversy amongst local campaigners.

All content from Kiddle encyclopedia articles (including the article images and facts) can be freely used under Attribution-ShareAlike license, unless stated otherwise. Cite this article:
Clifton East (ward) Facts for Kids. Kiddle Encyclopedia.