Climate of Pennsylvania facts for kids 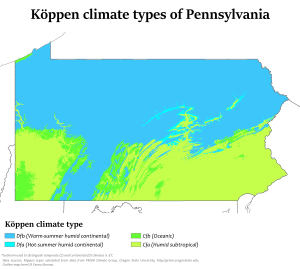 The climate of Pennsylvania is diverse due to the multitude of geographic features found within the state. Straddling two major climate zones, the southeastern corner of Pennsylvania has the warmest climate. Greater Philadelphia lies at the southernmost tip of the humid continental climate zone, with some characteristics of the humid subtropical climate that lies in Delaware and Maryland to the south. Moving west toward the mountainous interior of the state, the climate becomes markedly colder, the number of cloudy days increases, and winter snowfall amounts are greater.

Western areas of the state, particularly cities near Lake Erie, can receive over 100 inches (254 cm) of snowfall annually, and the entire state receives an average of 41 inches (1,041 mm) of rainfall every year. Floods are more common in March and April than other months of the year.

Tropical cyclones normally threaten the states during the summer and fall, with their main impact being rainfall. Although Hurricane Agnes was barely a hurricane at landfall in Florida, its major impact was over the Mid-Atlantic region, where Agnes combined with a non-tropical low to produce widespread rains of 6 inches (150 mm) to 12 inches (300 mm) with local amounts up to 19 inches (480 mm) in western Schuylkill County in Pennsylvania. These rains produced widespread severe flooding from Virginia northward to New York, with other flooding occurring over the western portions of the Carolinas.

Philadelphia has received sustained winds approaching hurricane-force from tropical cyclones in the past.

All content from Kiddle encyclopedia articles (including the article images and facts) can be freely used under Attribution-ShareAlike license, unless stated otherwise. Cite this article:
Climate of Pennsylvania Facts for Kids. Kiddle Encyclopedia.