Climate of Virginia facts for kids 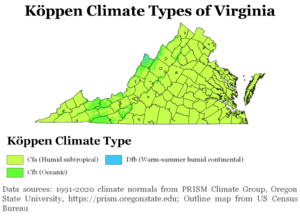 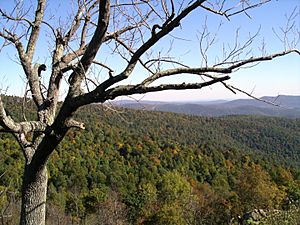 Due to its elevation, the Blue Ridge Mountains have a humid continental climate.

The climate of Virginia, a state on the east coast of the United States, is considered mild compared to more northern areas of the United States such as New England and the Midwest. Most of Virginia east of the Blue Ridge mountains, the southern part of the Shenandoah Valley, and the Roanoke Valley, has a humid subtropical climate (Köppen climate classification Cfa). In the mountainous areas west of the Blue Ridge, the climate is warm-summer humid continental (Köppen Dfb) or oceanic climate (Köppen Cfb). Severe weather, in the form of tornadoes, tropical cyclones, and winter storms, impacts the state on a regular basis. Central Virginia received significant snowfall of 20 inches in December 2009.

For more details, see Climate of the United States

A lot of variations occur because of the state's significant relief. Elevations in Virginia vary from sea level to Mount Rogers at 5,729 ft (1,746 m) above sea level, with major gradations occurring at the edges of the Atlantic Ocean, the end of the Piedmont, and the Blue Ridge and Allegheny chains of the Appalachian Mountains. The moderating influence of the ocean from the east, powered by the Gulf Stream, also creates the potential for hurricanes near the mouth of Chesapeake Bay. Cold air masses arrive over the mountains, especially in winter, which can lead to significant snowfalls when coastal storms known as noreasters move up the Atlantic coast.

The interaction of these elements with the state's topography create micro-climates in the Shenandoah Valley, the mountainous southwest, and the coastal plains that are slightly but noticeably distinct from each other. 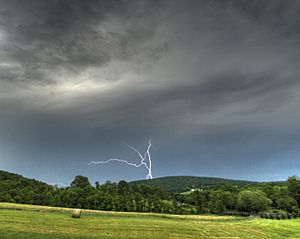 Thunderstorms are a frequent concern in Virginia.

Severe weather is a concern in Virginia. Hurricanes make the coastal area of Virginia vulnerable. It is rare for a major hurricane to threaten the Virginia coast as hurricanes this far north tend to weaken due to cooler coast waters and increasingly westerly winds aloft. Heavy rain from tropical cyclones remains a concern, however. Hurricane Isabel in 2003 brought much destruction from wind and rain, killing 10 directly and doing nearly two billion dollars in damage. Hurricane Gaston in 2004 inundated Richmond after moving ashore South Carolina. Virginia is often struck with the remnants of systems which hit along the Gulf of Mexico coastline, which also bring torrential rain to the state. Hurricane Camille was an extreme example, bringing 27 inches (690 mm) of rainfall to portions of Nelson County in a matter of hours. Thunderstorms are an occasional concern with the state averaging anywhere from 35-45 days of thunderstorm activity annually.

Rainfall in Virginia is frequent, but does not normally get severe enough for floods. Virginia averages seven tornadoes annually, though most are F2 and lower on the Fujita scale. However, Virginia had eighty-five in 2004. Western Virginia has a lower rate of tornadoes.

All content from Kiddle encyclopedia articles (including the article images and facts) can be freely used under Attribution-ShareAlike license, unless stated otherwise. Cite this article:
Climate of Virginia Facts for Kids. Kiddle Encyclopedia.