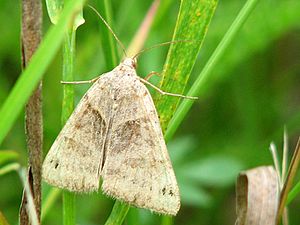 Caenurgina crassiuscula, the clover looper or range grass moth, is a moth of the family Erebidae. The species was first described by Adrian Hardy Haworth in 1809. It is found from coast to coast in the United States and adjacent parts of Canada, in the west to the Northwest Territories, Yukon, and Alaska.

The wingspan is 30–40 mm. Adults are on wing from March to November depending on the location.

The larvae feed on various species of clover, grass, and lupine.

All content from Kiddle encyclopedia articles (including the article images and facts) can be freely used under Attribution-ShareAlike license, unless stated otherwise. Cite this article:
Clover looper Facts for Kids. Kiddle Encyclopedia.