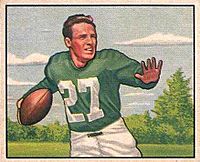 Clyde Luther Scott (August 29, 1924 – January 30, 2018) was an American athlete. He competed professionally in the National Football League and earned an Olympic medal in the 110 meter hurdles. He was born in Dixie, Louisiana. He played for the Philadelphia Eagles from 1949 through 1952 and for the Detroit Lions in 1952.

All content from Kiddle encyclopedia articles (including the article images and facts) can be freely used under Attribution-ShareAlike license, unless stated otherwise. Cite this article:
Clyde Scott Facts for Kids. Kiddle Encyclopedia.