Coalwood is an unincorporated community coal town in McDowell County, West Virginia, United States. The coal mine in Coalwood reached its peak in the 1950s and finally shut down production on October 1, 1986. As of the 1990 census—the last time the town was counted separately—the population was 900. The town is the setting of the best-selling memoir Rocket Boys by Homer Hickam and the October Sky movie that is based on the book. 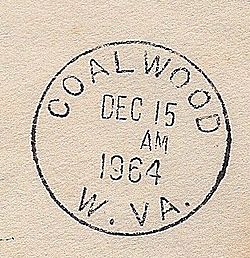 Carter hired a dentist and doctor to provide service to his miners.

In 1956, the Coalwood mine was connected underground to the nearby Caretta mine which was also owned by Olga. In 1959, Olga ceased bringing coal to the surface via Coalwood which prompted the Norfolk and Western Railway to begin pulling up the tracks leading to and from Coalwood.

The Coalwood-Caretta mine continued to be productive throughout most of the 20th century, producing on average one million tons annually until the mine was finally closed.

In 1980, the Olga Coal Company was bought by the LTV Corporation which closed Coalwood's mine in 1986.

Once a year, in October, Coalwood hosted an October Sky festival in honor of the accomplishments of the Rocket Boys. Many scientists and astronauts attended and Homer Hickam always made an appearance. The 2007 festival also represented the 50th anniversary of Sputnik, the first artificial satellite to go into orbit around the earth. Commemorating both events, an actor from the movie October Sky, Scott Miles, attended the festival to sign autographs. On February 7, 2012, the Cape Coalwood Restoration Association announced that the October 2011 festival, the 13th October Sky Festival, had been the last October Sky Festival. After the cancellation of the Rocket Boys/October Sky Festival was announced in February this year, Hickam was approached by a group of concerned Raleigh County citizens to inquire to the possibility of bringing the festival to their city. After weeks of conversations between the parties it was agreed that the 2012 Rocket Boys/October Sky Festival will be held in Beckley with many events taking place on the grounds of the Exhibition Coal Mine at New River Park on Oct. 5-7. 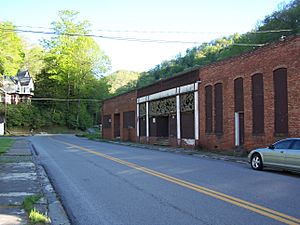 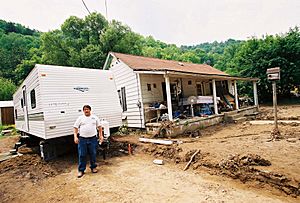 All content from Kiddle encyclopedia articles (including the article images and facts) can be freely used under Attribution-ShareAlike license, unless stated otherwise. Cite this article:
Coalwood, West Virginia Facts for Kids. Kiddle Encyclopedia.