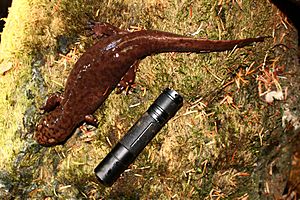 Dicamptodon tenebrosus next to 120mm flashlight

The coastal giant salamander can reach up to 34 cm (13 inches) in total length, making it the largest terrestrial salamander in North America. The coastal giant salamander has stout limbs with four toes on the front feet and five toes on the back feet. The species tail is around 40 percent of the total length of the salamander and is laterally compressed. The head, back, and sides have a marbled or reticulate pattern of dark blotches on a light brown or brassy-colored background. The head is broad with a shovel-like snout and a fold of skin across the throat called the gular fold. The eyes are medium in size and have a brass-flecked iris and a large black pupil. This species is one of the few salamanders capable of vocalizing.

A female coastal giant salamander will lay her eggs in moderate to slow flowing mountain streams under rocks and crevasses, hatching in early to mid spring. The coastal giant salamander, being a member of the genus Dicamptodon, exhibits two distinctive phases within its life; an aquatic larval stage with filamentous gills and an elongated tail with a caudal fin (similar to that of a tadpole), and a terrestrial adult form losing their caudal fin and filamentous gills, and instead developing robust legs and a pair of internal lungs.

Some coastal giant salamander larvae continue to grow into adults and become sexually mature without losing their external gills. This process is called neoteny. Neoteny is particularly common in the British Columbia populations. Adult-sized neotenes have a uniform brown coloring on their heads, sides, and backs.

Terrestrial adult coastal giant salamanders spend most of their time underground in burrows, emerging to reproduce and forage on rainy and humid nights.

The coastal giant salamander is endemic to the Pacific Northwest, found in Northern California, Oregon, Washington, and southern British Columbia.

Pacific giant salamanders are protected from being killed or collected under the Wildlife Act in British Columbia.

All content from Kiddle encyclopedia articles (including the article images and facts) can be freely used under Attribution-ShareAlike license, unless stated otherwise. Cite this article:
Coastal giant salamander Facts for Kids. Kiddle Encyclopedia.