Coat of arms of New York facts for kids

The coat of arms of the state of New York was formally adopted in 1778, and appears as a component of the state's flag and seal.

The shield displays a masted ship and a sloop on the Hudson River (symbols of inland and foreign commerce), bordered by a grassy shore and a mountain range in the background with the sun rising behind it. The unheraldic nature of the Hudson River landscape reveals the modern origin of the design.

The shield has two supporters:

A banner below the shield shows the motto Excelsior, a Latin word meaning "higher", "superior", "lordly", commonly translated as "Ever Upward."

The shield is surmounted by a crest consisting of an eagle surmounting a world globe.

The official blazon for the coat of arms is:

Charge. Azure, in a landscape, the sun in fess, rising in splendor or, behind a range of three mountains, the middle one the highest; in base a ship and sloop under sail, passing and about to meet on a river, bordered below by a grassy shore fringed with shrubs, all proper.

Crest. On a wreath azure and or, an American eagle proper, rising to the dexter from a two-thirds of a globe terrestrial, showing the north Atlantic ocean with outlines of its shores.

Supporters. On a quasi compartment formed by the extension of the scroll.

Dexter. The figure of Liberty proper, her hair disheveled and decorated with pearls, vested azure, sandaled gules, about the waist a cincture or, fringed gules, a mantle of the last depending from the shoulders behind to the feet, in the dexter hand a staff ensigned with a Phrygian cap or, the sinister arm embowed, the hand supporting the shield at the dexter chief point, a royal crown by her sinister foot dejected.

Sinister. The figure of Justice proper, her hair disheveled and decorated with pearls, vested or, about the waist a cincture azure, fringed gules, sandaled and mantled as Liberty, bound about the eyes with a fillet proper, in the dexter hand a straight sword hilted or, erect, resting on the sinister chief point of the shield, the sinister arm embowed, holding before her her scales proper.

Motto. On a scroll below the shield argent, in sable, Excelsior. 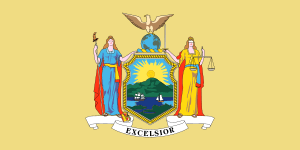 The coat of arms of the state flag was adopted in 1778 and the present flag is a modern version of a Revolutionary War flag. The original is at the Albany Institute of History & Art.

The legislature changed the field of the flag from buff to blue by a law enacted on April 2, 1901.

In 2001, the North American Vexillological Association surveyed its members on the designs of the 72 U.S. state, U.S. territorial, and Canadian provincial flags. After the survey was completed, NAVA members chose the flag of New York to be ranked 53rd out of the 72.

All content from Kiddle encyclopedia articles (including the article images and facts) can be freely used under Attribution-ShareAlike license, unless stated otherwise. Cite this article:
Coat of arms of New York Facts for Kids. Kiddle Encyclopedia.