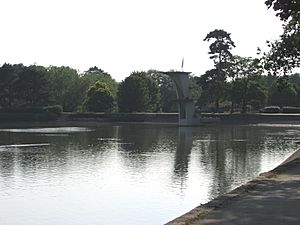 The concrete diving board at Coate, built 1935 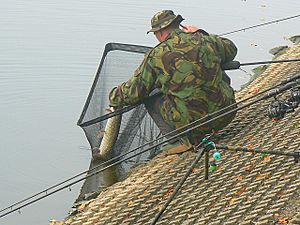 The fisherman has just landed a pike and is about to extract the hook.

Coate Water is a country park situated 5 km (3.1 mi) to the southeast of central Swindon, England, near junction 15 of the M4. It takes its name from its main feature, a reservoir originally built to provide water for the Wilts & Berks Canal.

The reservoir formed a 70-acre (280,000 m2) lake, built in 1822 by diverting the River Cole. Its primary purpose was to provide water for the canal and it remained outside the borough of Swindon until the borough's expansion in 1928.

In 1914, with the canal abandoned, Coate became a pleasure park; changing rooms and a wooden diving board were added. In 1935 the wooden diving platform was replaced with a 33 ft (10 m) high concrete platform in an Art Deco style which has been praised by English Heritage and, although swimming in the lake has been prohibited since 1958, it was given Grade II listed protection in 2013. Now named Coate Water Country Park, the lake is both a leisure facility and a nature reserve.

The area has Mesolithic, Neolithic, Bronze Age, Iron Age, Romano-British and Medieval history that spans a period of 7000 years or more.

The oldest known ancient monuments at Coate are the undated stone circle and the Bronze Age burial mounds along Day House Lane. Further Middle Bronze Age cremations, a possible pond barrow, and two large ring ditches have been found on the opposite side of the small Day Brook valley. A large, regionally significant Mesolithic flint scatter, with some topologically late artifacts, is also present c.150m south west of Coate Stone Circle. Six stone circles were recorded in the 18th/19th and early 20th centuries, all in the Coate area, and possibly linked, at least in part, by avenues of large sarsen stones. The remains of one of the stone circles probably still lies at the bottom of the lake at Coate Water. Other relevant archaeology listed on the Sites and Monuments Records includes the Coate Mound, excavated with very little record in the earlier 20th c, which is spatially associated with the Mesolithic artifact scatter. 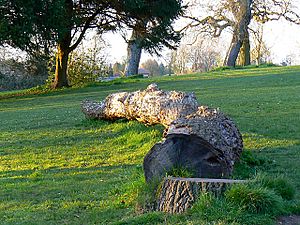 An area of 51.1 hectares of the lake and its margins has been notified as a biological Site of Special Scientific Interest, mainly for its breeding bird populations. Part of the site is also a local nature reserve.

Coate Water is a notable site for birds. The following rare-in-Wiltshire species have been recorded there:

Organisations based at the lake include Swindon Rowing Club and Coate Water Sailing Trust.

Author Richard Jefferies (1848–1887) was born at Coate village, a short distance northeast of Coate Water in Chiseldon parish; his home is now a museum. The "New Sea" in his Bevis books was based on Coate Water.

All content from Kiddle encyclopedia articles (including the article images and facts) can be freely used under Attribution-ShareAlike license, unless stated otherwise. Cite this article:
Coate Water Country Park Facts for Kids. Kiddle Encyclopedia.