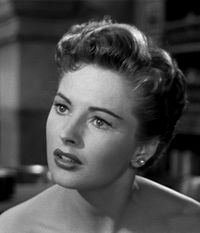 She was known for her roles in Nightmare Alley, Kiss of Death, Red River, and in The Killing. She began her acting career in 1944. Gray retired in 1988.

Gray was born in Staplehurst, Nebraska. She studied at Hamlin University.

All content from Kiddle encyclopedia articles (including the article images and facts) can be freely used under Attribution-ShareAlike license, unless stated otherwise. Cite this article:
Coleen Gray Facts for Kids. Kiddle Encyclopedia.