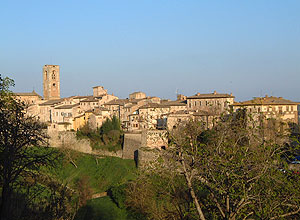 Colle di Val d'Elsa or Colle Val d'Elsa is a town and comune in Tuscany, Italy, in the province of Siena. It has a population of c. 20,000 inhabitants (2005). Its name in Italian means "Hill of Elsa Valley", where "Elsa" is the name of the river which crosses it. Today, Colle di Val d'Elsa is internationally renowned for the production of crystal glassware and art, largely produced in the industrial lower town. 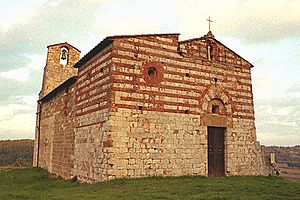 The area was settled by man from at least the 4th millennium BC,. In 1269 it was the seat of a famous battle during the wars of Guelphs and Ghibellines and in 1479 it was attacked by Neapolitan soldiers. From the 14th century it was under the control of the city of Florence and the Grand Duchy of Tuscany until the unification of Italy in 1860. In the 20th century it became an important industrial town. During World War II it was bombed by Allied aircraft. The oldest part of the town is the "colle alta", the higher part, with a well preserved medieval center. The city is also famous as the birthplace of sculptor and architect Arnolfo di Cambio.

All content from Kiddle encyclopedia articles (including the article images and facts) can be freely used under Attribution-ShareAlike license, unless stated otherwise. Cite this article:
Colle di Val d'Elsa Facts for Kids. Kiddle Encyclopedia.