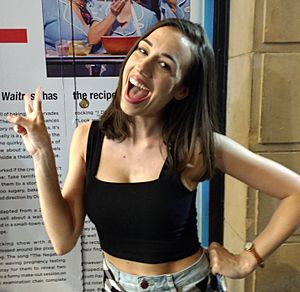 Ballinger in 2019 after a performance in the Broadway musical Waitress

Colleen Mae Ballinger (born November 21, 1986) is an American YouTuber, comedian, actress, singer and writer. She is best known for her Internet character Miranda Sings, posting videos of the character on YouTube, performing her one-woman comedy act on tours and creating a Netflix original television show based on the character titled Haters Back Off. She was born in Santa Barbara, California.

She guest-starred as Miranda Sings on Comedians in Cars Getting Coffee with Jerry Seinfeld (2014) and has appeared twice on The Tonight Show. Ballinger has released two best-selling books, written in Miranda's voice, Selp-Helf and My Diarrhe.

All content from Kiddle encyclopedia articles (including the article images and facts) can be freely used under Attribution-ShareAlike license, unless stated otherwise. Cite this article:
Colleen Ballinger Facts for Kids. Kiddle Encyclopedia.