Collina d'Oro (called Gold Hill in English) is a municipality of the district Lugano in the canton of Ticino in Switzerland. It was made on 4 April 2004 from the merging of the villages of Agra, Gentilino, and Montagnola. On 1 April 2012, it incorporated the formerly independent municipality of Carabietta. 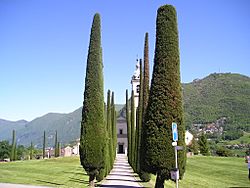 All content from Kiddle encyclopedia articles (including the article images and facts) can be freely used under Attribution-ShareAlike license, unless stated otherwise. Cite this article:
Collina d'Oro Facts for Kids. Kiddle Encyclopedia.