Agno is a historic town and a municipality in the district of Lugano in the canton of Ticino in Switzerland.

The official language of Agno is Italian.

Agno is first mentioned in 818 as Anium. It was known by its German name Eng, though this is no longer used. 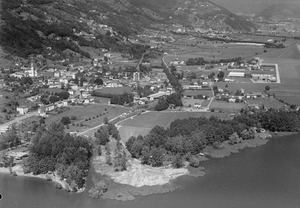 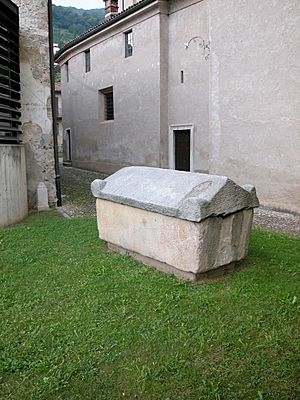 Etruscan tomb located in the churchyard of S. Giovanni Battistat

The emergence of the Pieve or Parish of Agno is related to the spread of Christianity in late-Roman era along the Milan-Como-Riva San Vitale axis. The dedication of the church to Saint John the Baptist (San Giovanni Battista) refers to its character as a baptistery. Documents from the years 735 and 818 (deed of gift by King Louis the Pious) testify to the existence of a religious center at Agno. Originally, it was probably an Ambrosian Rite church, but in 1002-04 it came into the possession of the Bishop of Como. A collegiate chapel is first mentioned in 1192. The first known pastor is Gulielmus de Merchurolo in 1288. The extent of the parish (from Bironico to Marchirolo) is mentioned in the manuscript of Sessa from 1352.

Initially it was under the authority of Como, and later the Duchy of Milan. At the beginning of the 15th Century it was part of the communitas Vallis Lugani and appointed representatives to the Council of the Bailiwick. Following the Act of Mediation of 1803, the parish lost its political meaning entirely. 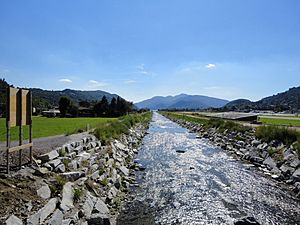 Because of its strategic location at the northern end of an arm of Lake Lugano and along the Varese-Ponte Tresa-Monte Ceneri road, Agno was possibly the center of a Roman Pagus. Some of the archeological finds from Roman Agno are in the local Museo plebano. As a central town, Agno became a commercial center with numerous market privileges. One of these markets, the Fair of S. Provino (second Monday in March) has survived to this day.

The Collegiate Church of San Giovanni Battista stands on the foundations of a previous Roman building. Within the church are the relics of the patron saint, San Provino, who was the second Bishop of Como. The oldest village lay at the foot of the church, and later, the settlement extended to the hills and along the streets.

The correction of the Vedeggio river course was done in 1906, which opened up additional agricultural land in Agno. After World War II the town grew rapidly from trade and industry. The emergence of tourism as an economic factor is reflected in population growth from 1960. In 1980, the Lugano-Agno airport opened allowing scheduled flights into nearby Lugano. Its importance is continually growing both in terms of tourism in Ticino and the development of a financial center in Lugano. In 1990, there were 16,270 flights and 300,000 passengers into the airport. In 1996, the Federal Council granted additional concession, which allowed the expansion of infrastructure to accommodate 700,000 passengers annually. 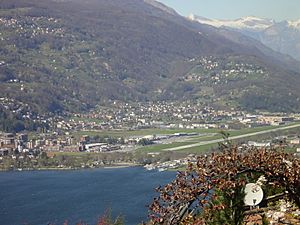 Of the built up area, industrial buildings made up 4.4% of the total area while housing and buildings made up 25.7% and transportation infrastructure made up 11.2%. while parks, green belts and sports fields made up 6.0%. Out of the forested land, 17.3% of the total land area is heavily forested and 6.0% is covered with orchards or small clusters of trees. Of the agricultural land, 21.7% is used for growing crops, while 3.2% is used for orchards or vine crops and 25.7% is used for alpine pastures. Of the water in the municipality, 0.4% is in lakes and 2.0% is in rivers and streams. Of the unproductive areas, 1.2% is unproductive vegetation and .

The municipality is located in the Lugano district, and is the most important municipality in the Malcantone valley. It consists of the village of Agno and the settlements of Cassina, Mondonico and Serocca.

The village of Agno is served by Agno station on the Lugano–Ponte Tresa railway. Serocca station, serving the eponymous settlement, is also within the municipality. Both stations are served by regular trains, operating every 15 minutes during weekday daytime, and every half hour at other times. Agno station is also served by an Autopostale bus service to Aranno and Cademario Casa di Cura.

The terminal buildings of Lugano Airport lie within the municipality of Agno, and the airport is sometimes known as Lugano-Agno Airport. The airport is linked to Lugano by a shuttle bus that meets all flights, and is a sign-posted 10-minute walk from Agno station.

The blazon of the municipal coat of arms is Per fess, in chief gules a cross argent and in base argent a fish naiant gules.

All content from Kiddle encyclopedia articles (including the article images and facts) can be freely used under Attribution-ShareAlike license, unless stated otherwise. Cite this article:
Agno Facts for Kids. Kiddle Encyclopedia.