The Colville River (/ˈkoʊlvɪl/; Inupiat: Kuukpik) is a major river of the Arctic Ocean coast of Alaska in the United States, approximately 350 miles (560 km) long. One of the northernmost major rivers in North America, it drains a remote area of tundra on the north side of the Brooks Range entirely above the Arctic Circle. The river is frozen for more than half the year and floods each spring.

It rises on the north slope of the De Long Mountains, at the western end of the Brooks Range, north of the continental divide in the southwestern corner of the National Petroleum Reserve. It flows initially north, then generally east through the foothills on the north side of the range, broadening as it receives the inflow of many tributaries that descend from the middle Brooks Range. Along its middle course it forms the southeastern border of the National Petroleum Reserve. At the Iñupiat village of Umiat it turns north to flow across the Arctic plain, entering the western Beaufort Sea in a broad delta near Nuiqsut, approximately 120 mi (190 km) west of Prudhoe Bay.

Measuring about 20 by 23 by 26 miles (32 by 37 by 42 km), the river's triangular delta includes 34 distributaries, each with its own mouth, at normal water stages. During high water, the number of distributaries may reach 5,000. The largest distributary is the Nechalic Channel, which flows through Nuiqsut.

The river valley contains developed and undeveloped petroleum and natural gas deposits. In 2015, construction was completed on a bridge spanning the Colville River north of Nuiqsut. This makes it the first major river crossing north of the Arctic Circle in North America. The bridge, at a cost of $100 million, gives its owner ConocoPhillips access to petroleum resources further West in the NPRA.

According to the United States Geological Survey, in 1837 British explorers P. W. Dease and Thomas Simpson named the river for Andrew Colvile, whose last name they spelled "Colville". 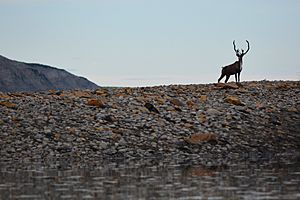 A caribou standing on the banks of the Colville River. Thousands of caribou live on or around the river during the summer months, and provide a traditional source of subsistence food for the region's Iñupiat communities.

The Colville River and its adjacent hills are home to a variety of Arctic wildlife. The Colville runs through the range of the Teshekpuk and Central Arctic caribou herds, making it a landmark and obstacle in one of the world's largest animal migrations. It is also home to brown bears and, nearer the Arctic coast, polar bears.

The Colville River has been called "hawk heaven" for its incredible concentration of peregrine falcons, gyrfalcons, and golden eagles. The steep, loose bluffs of the Colville River provide prime nesting habitat for many birds. 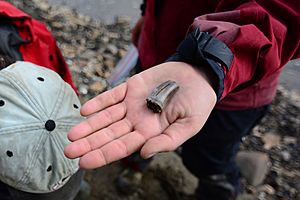 A paleontologist holds a newly discovered fossil dinosaur tooth on the Colville River. Annual erosion of the crumbling Colville River bluffs causes fossils to spill onto the riverbanks every year. A scientific government-issued permit is required for fossil collection.

In 1961, Shell Oil geologist Robert Liscolm discovered dinosaur fossils at multiple locations while surveying the Colville River. However, his discoveries were met with incredulity and suspicion in the paleontology community due to the site's extreme northern location, and Liscolm died the following year in a rock slide while continuing his surveying of the Colville. In the mid- to late-1980s, Liscolm's notes were rediscovered and paleontologists returned to Liscolm's sites only to find many more dinosaur fossils and tracks. Today, the Colville River bluffs are widely recognized as one of the fossil-rich regions in the Arctic, with enormous quantities of Cretaceous dinosaur fossils. Specimens collected on the Colville include theropods, ankylosaurs, albertosaurs, pachyrhinosaurus, gorgosaurus, and hadrosaurs.

Fossils, which are legally described as any sign or remnant of ancient life, may only be collected from public lands with a government-issued permit. Illegally removing fossils from the Colville River, or other public lands, can expose a violator to steep fines or jail time. 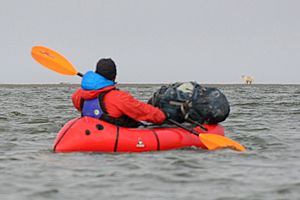 Packrafter Brett Woelber of Expedition Arguk floats near a polar bear on the Colville River delta.

In a region with virtually no roads, the Colville River serves as one of the transportation arteries in the Alaska arctic. In the summer, small motorboats transport indigenous subsistence hunters, paleontologists, geologists, and others working or hunting in the region. When the river freezes to a suitable thickness during winter, it can be used as an ice road to bring in supplies, as seen during the fourth season of the History Channel series Ice Road Truckers. A very small number of recreational boaters float the Colville annually, though the extreme remoteness, harsh conditions, relative lack of air transportation hubs, and presence of polar bears make recreational boating challenging.

All content from Kiddle encyclopedia articles (including the article images and facts) can be freely used under Attribution-ShareAlike license, unless stated otherwise. Cite this article:
Colville River (Alaska) Facts for Kids. Kiddle Encyclopedia.