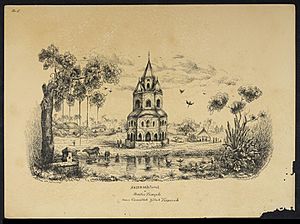 A sketch of The Jagannath temple in 1843

Comilla Jagannath Temple is a Hindu temple in Comilla, in southeastern Bangladesh. Its terracotta brick construction is in the typical Bengal style of temple architecture. The temple was originally built in the 16th century by Sree Sreejoktou Moharaja Rada Kishor Manikuo Bahadur, who was the king of Tripura. The statues of the deities of Jagannath, Balabhadra and Subhadra were originally installed in a temple in Tripura from where they were subsequently shifted to this temple.

All content from Kiddle encyclopedia articles (including the article images and facts) can be freely used under Attribution-ShareAlike license, unless stated otherwise. Cite this article:
Comilla Jagannath Temple Facts for Kids. Kiddle Encyclopedia.