Kids Encyclopedia Facts
For other uses, see Commercial Road (disambiguation).
Not to be confused with Commercial Street, London.

Commercial Road is a street in the London Borough of Tower Hamlets in the East End of London. It is 1.9 miles (3.1 km) long, running from Gardiner's Corner (previously the site of Gardiners department store, and now Aldgate East Underground station), through Stepney to the junction with Burdett Road in Limehouse at which point the route splits into the East India Dock Road and the West India Dock Road. It is an artery connecting the historic City of London with the more recently developed financial district at Canary Wharf, and part of the A13.

The road contains several listed buildings. These include the George Tavern, the Troxy cinema, the Limehouse Town Hall and the Albert Gardens estate. 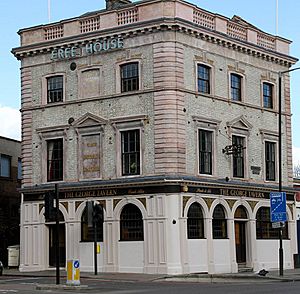 Commercial Road was constructed in 1802–6 as a direct route to link dock traffic between the West India Docks and East India Docks to the City of London. An Act of Parliament awarded construction to the Commercial Road Company, whose trustees were allowed to raise money and levy tolls. The road originally began at Back Church Lane and cut a straight line across fields north of the busy Ratcliffe Highway, taking advantage of land cleared by a major fire in 1794 that had destroyed a large part of the neighbourhood. By the 1830s it was almost entirely lined with houses all the way to Limehouse.

In 1828, the Commercial Road Company built a tramway from Aberdeen granite along the road, to alleviate traffic concerns. The London and Blackwall Railway was built parallel to Commercial Road; along with the numerous factories, this caused the street to become overcrowded and polluted.

In the 1860s Commercial Road became a public road, with ownership transferring to the Metropolitan Board of Works (MBW), and road tolls were abolished. In 1870, the MBW extended the street westwards to Gardiner's Corner, where it met Whitechapel High Street and Commercial Street. This junction remained in place until Gardner's was destroyed in a fire in the early 1970s.

In 1943, Commercial Road was marked for improvement in the County of London Plan, after much of the surrounding area had been destroyed by bombing. Numerous side streets south of the road towards Ratcliffe Highway were cleared of slums and replaced with modern housing. The Commercial Road Conservation Area was established by the London Borough of Tower Hamlets in 1989. It is focused on numerous listed buildings around Nos. 300–334 about halfway along the road. 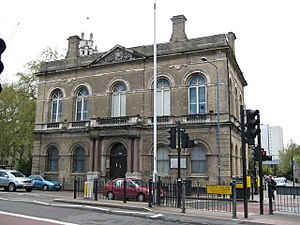 Albert Gardens lies to the south of Commercial Road. It was laid out in the early 19th century, originally named Albert Square Garden, and has largely survived intact into the 21st. The square consists of three sides of three-storey residential buildings constructed in the 1840s, overlooking a railed garden. The other side faces onto Commercial Road. The land was brought by the London County Council in 1899 to prevent development on the fourth side, and opened the land to the public in 1906. It was given its current name in 1937.

Nos. 440–450 are all Grade II listed. They were built in the early 19th century as a terrace, and all span four storeys with parapets roofs, round arched entrances and panelled doors.

The Troxy Cinema at No. 490 was opened by George Coles and Arthur Roberts in 1933 on a former brewery site. It cost £250,000 to develop and could house over 3,000 people. The main theatre housed a revolving stage Wurlitzer organ which could be raised from the orchestra pit to provide interval music; these have survived intact. It closed in 1960, reopening in 1963 as a training school for the Covent Garden Opera. It subsequently became a bingo hall. It was grade II listed in 1991.

Limehouse Town Hall is at No. 646, constructed in 1879 by A. and C. Harston. It was badly damaged in World War II and rebuilt as council offices. It has subsequently served as the National Museum of Labour History, a homeless shelter, and an arts centre. The Passmore Edwards Sailors Palace at No. 680 was built in 1901 in a Neo Tudor style. It has been Grade II listed since 1983. 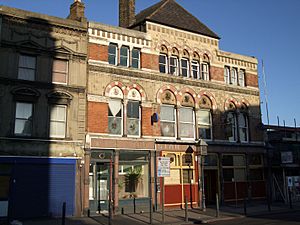 The Star of the East

The Grade II listed Caird & Rayner Warehouse at No. 777–783 was constructed in 1869. It contained a timber frame enclosed by a brick exterior. In 2010, it caught fire which destroyed most of the roof. Urgent repairs took place in 2010 in light of its listed status.

The Star of the East, at No. 805 was built in the early 19th century, and Grade II listed in 1973. It was constructed from red brick with a slate roof. In 2019, urgent repairs were made to the premises in order for it to retain its listed status.

The Church of St Mary and St Michael is at No. 340. It was designed by William Wardell and constructed between 1852 and 1856. A sloping roof was built over the entrance in the 1920s. It became Grade II listed in June 2001. The Congregation of Jacob Synagogue is at Nos. 351–353. It was founded in 1903 as Britain's first Mizrachi synagogues, and moved into the present building in 1920. The premises had been originally constructed by Lewis Solomon and Son. London's first mosque, the East London Mosque, opened on Commercial Road in 1941 and remained there until it was relocated to Whitechapel in 1975.

A K2 phone box outside No. 48 Commercial Road was Grade II listed in 1987. It was designed by Giles Gilbert Scott and installed in 1927.

As the main route between the City and the traditional East End, Commercial Road is the busiest road in the London Borough of Tower Hamlets. There is continuous heavy traffic along the road, with limited opportunities for pedestrians crossing.

All content from Kiddle encyclopedia articles (including the article images and facts) can be freely used under Attribution-ShareAlike license, unless stated otherwise. Cite this article:
Commercial Road Facts for Kids. Kiddle Encyclopedia.