The Commodore 16 is a home computer made by Commodore International, released in 1984 and intended to be an entry-level computer to replace the VIC-20. A cost-reduced version, the Commodore 116, was sold only in Europe.

While the C16 was a failure on the US market, it enjoyed some success in certain European countries and in Mexico. 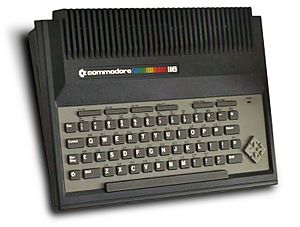 The C16 was a flop in the US and was discontinued within a year, but it sold reasonably well in Europe as a low-end game machine (over 90% of all C16 software was produced by European developers) and in Mexico as well.

The C16's failure in the US market was likely due to a lack of software support, incompatibility with the C64, and lack of importance to Commodore after its competitors withdrew from the market.

All content from Kiddle encyclopedia articles (including the article images and facts) can be freely used under Attribution-ShareAlike license, unless stated otherwise. Cite this article:
Commodore 16 Facts for Kids. Kiddle Encyclopedia.