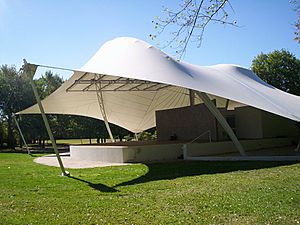 Commonwealth Park is in Canberra, Australia, adjacent to the north side of Lake Burley Griffin. Centrally located in the city, it is an important part of the urban landscape. The park has an area of 34.25 hectares, which includes a variety of natural and constructed spaces.

Various designers have been involved in the construction of the park including Charles Weston, Lindsay Pryor, Richard Clough and John Grey. The park in it current form was strongly influenced by a master plan created by British landscape designer, Dame Sylvia Crowe in 1964.

The park has many small ponds and water features, walking trails, bike paths, sculptures and memorials. Located within the park is the outdoor Stage 88, which often holds concerts. The park includes Regatta Point and has a view of the National Gallery, High Court, and National Library on the other side of the lake. Kings Park is located adjacent to Commonwealth Park, along the lake to the east.

Commonwealth Park is the home of many events hosted in Canberra. Among them is Floriade, an annual event that has been running since 1988.

History of the location

In 1874, Ebenezer Booth built himself a house on the glebe of St John the Baptist Church, within the present boundaries of the park, to the east of what is now Nerang Pool. Murray's store, considered the area's first retail store, operated from the house. It burnt down in 1923. A number of stunted pines and English elms remain on the spot.

In his original plan for the city, Walter Griffin included a recreation area to the north of the man-made lake. His final plan of 1918 included an "aquarium pond", now Nerang Pool. Modifications from Griffin's plan of 1911 came about following his actual visit to the site and in order to reduce the amount of earthworks needed. The recreation area in the earlier plan was more formal and included many public buildings.

Works of Art in the Park

Memorials in the Park

All content from Kiddle encyclopedia articles (including the article images and facts) can be freely used under Attribution-ShareAlike license, unless stated otherwise. Cite this article:
Commonwealth Park Facts for Kids. Kiddle Encyclopedia.