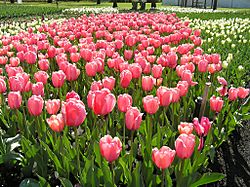 Floriade is a flower and entertainment festival held annually in Canberra's Commonwealth Park featuring extensive displays of flowering bulbs with integrated sculptures and other artistic features. Floriade comes from the Latin word floriat, which means to design with flowers.

The festival attracts tourists from around Australia and overseas in spring from mid September to mid October each year, and is considered the most important regular event for tourism in the Australian Capital Territory. It is also called "Australia's Celebration of Spring". After some controversy regarding an entry charge, admission to Floriade has been free for a number of years.

Floriade was the idea of Christiaan Slotemaker de Bruine, Landscape Architect with the Department of Capital Territory in Canberra. He commenced the design in 1986 and based it on the world famous 'Keukenhof' garden in The Netherlands. He orchestrated the construction with Peter Sutton, Holticulturist and Manager of Commonwealth Garden. He arranged the marketing, sculptures, live music, the purchase of bulbs, entertainment, lifting of bulb quarantine quotas as well as the design. Together with Sutton, they built the design on the Site of Commonwealth Park with the help of City Parks staff. The design concept was 'multiculturalism of the Nation' and included Dutch and Aboriginal floral layouts. de Bruine obtained sponsorship from the Embassy of the Netherlands and the Bicentennial Authority. Sutton and de Bruine continued their successful partnership during the next two years, 1989 and 1990.

Floriade started in 1988 as a one off celebration of Canberra's 75th birthday and Australia's Bicentenary of European settlement. Due to the success and popularity of the event it has ran with a new theme every year, and is the largest flower festival in the Southern Hemisphere, with over 300,000 visitors each year. In 2018 over 480,000 attended, and in 2019 there was record attendance of over 507,000, beating the prior 2014 record of nearly 482,000.

in 2020 due to the COVID-19 pandemic the one million bulbs and annuals that would typically beautify Commonwealth Park were rearranged over 130 sites to create a Tulip Trail through Canberra's suburbs and city for Floriade: Reimagined. Around 300,000 of the million bulbs and annuals were distributed to community groups and organisations, with not-for-profits, sporting clubs, schools and early learning centres as well as residents’ groups across Canberra. 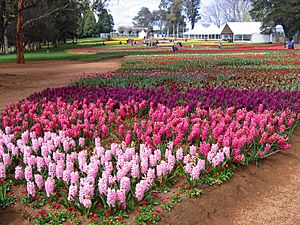 Floriade gives expression to public art, each year commissioning works which are placed in the Floriade gardens. Some remain beyond the festival. Floriade also showcases musical displays with many live performances, cultural celebrations, artistic displays, entertainment and recreational activities.

Floriade has also held a gnome decorating competition and display for several years, with strong participation from schools, aged people's homes, and businesses. Since 2005 the Floriade Gnome Gnoll has been managed by the Rotary Club of Canberra East, with proceeds going to local and overseas activities. The 2005 theme of Rock 'n Roll only accentuated the regular theme of decorating gnomes as the members of bands. Examples shown below are the Australian children's entertainers, The Wiggles, in this case renamed The Gniggles, and the crowd favourite, KISS submitted by Weetangera Primary School.

From 1989 to the late 90s, "Floriade by Night" featured night time food, lighting displays, stalls and entertainment. It ran over several nights and was free. Night opening returned in 2008, now called NightFest, as a paid ticketed event. It includes live music, comedy and acrobatics performances, shopping, cocktails and movies.

All content from Kiddle encyclopedia articles (including the article images and facts) can be freely used under Attribution-ShareAlike license, unless stated otherwise. Cite this article:
Floriade (Canberra) Facts for Kids. Kiddle Encyclopedia.