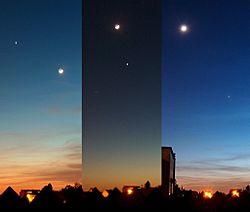 Three consecutive days of close conjunction between the Moon and Venus.

Conjunction is a word used in astronomy and astrology. It means that, as seen from some place (usually the Earth), two celestial bodies appear near one another in the sky. The event is also sometimes known as an appulse.

The astronomical and astrological symbol of conjunction is ☌(in Unicode x260c) and handwritten:

All content from Kiddle encyclopedia articles (including the article images and facts) can be freely used under Attribution-ShareAlike license, unless stated otherwise. Cite this article:
Conjunction (astronomy and astrology) Facts for Kids. Kiddle Encyclopedia.