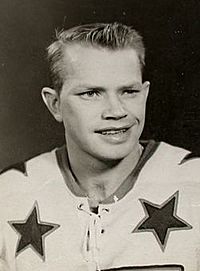 Thomas Connell "Connie" Broden (April 6, 1932 – November 23, 2013) was a Canadian ice hockey forward. He played his whole National Hockey League career with the Montreal Canadiens. He two Stanley Cups with Montreal in 1957 and 1958. He was born in Montreal, Quebec.

Broden died on November 23, 2013 at the St. Michael's Hospital in Toronto, Ontario. He was 81 years old. He was outlived by his wife and children.

All content from Kiddle encyclopedia articles (including the article images and facts) can be freely used under Attribution-ShareAlike license, unless stated otherwise. Cite this article:
Connie Broden Facts for Kids. Kiddle Encyclopedia.