Kids Encyclopedia Facts
This page is about the suburb within Perth, Western Australia. For other uses, see Connolly (disambiguation).

Connolly is a northern suburb of Perth, Western Australia, located within the City of Joondalup adjacent to Joondalup's central business district. It was built in the late 1980s as a golf course estate. Its eastern border backs onto the Mitchell Freeway road reserve. Many homes feature on the edges of Connolly but the homes bordering the golf course are generally larger and more affluent.

The suburb was named in honour of John Connolly who held land in the area in 1838. Connolly was a private in the 63rd Regiment who arrived in the colony in 1829 and who farmed at Upper Swan and Bindoon after being discharged in 1834. 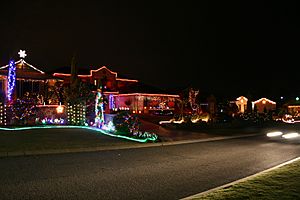 An entire local street, namely Prairie Dunes Place has gained notability for its annual Christmas lights display. Since 1999, the street has been raising funds for the Association of the Blind WA and in this time has raised in excess of $80,000 [AUD] (2007) towards the training of guide dogs.

The suburb is served by bus links which provide connections back to the Joondalup Line via either the Whitfords or Joondalup railway stations.

All content from Kiddle encyclopedia articles (including the article images and facts) can be freely used under Attribution-ShareAlike license, unless stated otherwise. Cite this article:
Connolly, Western Australia Facts for Kids. Kiddle Encyclopedia.