Currambine is a northern suburb of Perth, the capital city of Western Australia 30 km north of Perth's central business district. Its local government area is the City of Joondalup. It contains the Currambine Central shopping centre and cinema complex.

Currambine was approved as a suburb name in 1980. The name was chosen by the City of Wanneroo in 1979 from a book by A.W. Reed. It is an Aboriginal word from New South Wales meaning "heaps of rocks".

Currambine was developed as a chiefly residential suburb in the mid-1990s on land adjacent to the Currambine train station, which was built and opened in 1993.

Currambine is bounded by Burns Beach Road to the north, Marmion Avenue to the west, Shenton Avenue to the south and Mitchell Freeway to the west. The suburb is effectively bisected into quarters by the dual carriageways Connolly Drive (north-south) and Moore Drive (east-west).

Currambine is a residential suburb, and is served by the Currambine Market Place shopping centre (now renamed Currambine Central) at its southwestern corner. 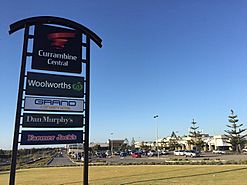 The southeastern part of the suburb contains 5 holes of the 27-hole Joondalup Golf Course, part of the Joondalup Resort complex based in neighbouring Connolly. The suburb also contains two primary schools, one public (1997 Currambine Primary School) and one private (Francis Jordan Catholic School). The suburb is within Ocean Reef Senior High School's catchment area. A community centre is also available for use, located near Currambine Central. 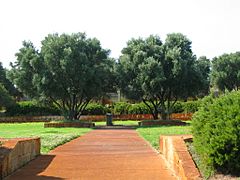 Currambine has a number of parks and recreational natural areas spread across the suburb. They include

Currambine is served by the 460, 461, 470, these three busses run through Shenton ave 471 and 472 Transperth bus routes from Joondalup, operated by Transdev Perth and by the Currambine railway station.

All content from Kiddle encyclopedia articles (including the article images and facts) can be freely used under Attribution-ShareAlike license, unless stated otherwise. Cite this article:
Currambine, Western Australia Facts for Kids. Kiddle Encyclopedia.