Marmion Avenue is a 40-kilometre (25 mi) arterial road in the northern coastal suburbs of Perth, Western Australia, linking Trigg in the south with Yanchep in the north. It forms part of State Route 71 along with West Coast Highway, which it joins onto at its southern terminus. 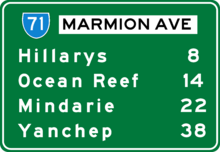 Marmion Avenue was first built as an arterial road that tracked the then-new outer northern suburbs of Perth, following the limit of the Perth metropolitan area as it expanded northwards. In the late 1960s, the road originally began at Beach Road in Marmion, giving the road its namesake.

Until the early 1980s, the road was a two-lane single carriageway connecting the coastal suburbs of Marmion and Mullaloo Beach. In 1984-85, the road was extended southwards to Karrinyup Road where it joined seamlessly onto West Coast Highway, which had been realigned further inland around the same time. Now the most important road in Perth's coastal suburbs, Marmion Avenue was duplicated up to Whitfords Avenue. In early 1986, it was assigned State Route 71, and from then on was gradually extended as a single carriageway road further north - extending first to Prendiville Avenue (just north of Ocean Reef Road), to Burns Beach Road in 1991 and to Quinns Road in the mid-1990s. Marmion Avenue was finally duplicated to its terminus in 2001, with the last portion being the empty stretch between Burns Beach Road & Quinns Rocks.

After delays due to disagreements at State Government level about what route the road should follow, Marmion Avenue was extended further north to Yanchep and opened to traffic in November 2008. The extension is currently a single carriageway, but earthworks have already been undertaken to enable conversion to dual carriageway at a later date. The extension also features roundabouts at future major junctions. The completion of this extension allowed the future satellite city of Alkimos/Eglinton to begin construction.

Extensions of Marmion Avenue are possible to Two Rocks. However, there are no plans for this at present – one possible complication would be Two Rocks's past use as a munitions dump, meaning that most non-suburban sections of the suburb are fenced off.

Marmion Avenue begins at the end of West Coast Highway at the Karrinyup Road intersection in Trigg, and currently ends at the coastal suburb of Yanchep and the Yanchep Beach Road roundabout. Almost all major intersections are controlled by traffic lights, with roundabouts more prevalent in the north, from Shenton Avenue onwards.

All content from Kiddle encyclopedia articles (including the article images and facts) can be freely used under Attribution-ShareAlike license, unless stated otherwise. Cite this article:
Marmion Avenue Facts for Kids. Kiddle Encyclopedia.