Eglinton is an unpopulated locality in the Western Australian capital city of Perth, located approximately 44 kilometres (27 mi) north of Perth's central business district on the Indian Ocean. For the most part, the suburb is covered in native banksia woodland, scrubland and heath typical of the Swan Coastal Plain.

Part of the City of Wanneroo local government area, it is bounded to the north by Yanchep, to the east by Carabooda and to the south by Alkimos. The area is part of the Alkimos-Eglinton region being considered by the State Government for a future urban region.

Eglinton is now being developed with the Amberton estate from Stockland. A number of houses have been built with many more under construction.

Eglinton was approved in 1974 as a suburb name and is named after the barque Eglinton which was wrecked on rocks near Alkimos which now bear its name.

Prior to European settlement, Noongar Aboriginal of the Mooro tribe had lived in what has become the northern Perth metropolitan region for more than 40,000 years, taking advantage of the abundant food and water around the chain of wetlands on the Swan Coastal Plain. According to local legend, Pipidinny Swamp, located in eastern Eglinton, was created from the blood and meat of the crocodile's tail as he walked back towards the Swan River after his fight with the shark.

In 1865, European settlers established the Aboriginal tracks along the west side of the lakes as a stock route from Dongara (near Geraldton) to Fremantle. The portion of the stock route between Joondalup and Yanchep was made part of the Bicentennial Heritage Trails Network in 1988, and is now known as the Yaberoo Budjara Heritage Trail.

The area is mostly scrub and bush today but also has some low-level agriculture based along Wanneroo and Pipidinny Roads. 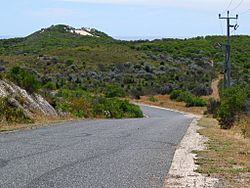 There are plans for an Alkimos-Eglinton Satellite City, covered by Amendment 1029/33 to the Metropolitan Region Scheme (May 2006). LandCorp, the State's land development agency, estimates that 55,000 people will live in the area once it is complete, that the centre will include "hospitals, tertiary educational institutions, major retail, commercial and recreational facilities" and that stage 1 blocks would be offered for sale in 2008. The Environmental Protection Authority, however, raised concerns in November 2005 about the amendment, saying that it "would, in part, be inconsistent with the conservation and protection of significant environmental and geoheritage values in the area", and recommended that the amount of reserves be greatly increased. The next major waste water treatment plant for the metropolitan region has been earmarked to be built in the Eglinton area. It is designed to provide catchment from Two Rocks south to the existing Beenyup treatment plant catchment boundary.

Eglinton lies roughly between the proposed Mitchell Freeway to the east and the Indian Ocean to the west.

Eglinton's population was not measured at the ABS 2006 census. A few agricultural holdings exist at the eastern end of the suburb near Pipidinny Swamp.

Eglinton has no conventional facilities at the present stage but the Amberton estate is now under development with some houses built, many more under construction and many blocks titled.

Amberton is joined to Shorehaven which will have very significant infrastructure.

Eglinton was previously accessible only by Pipidinny Road, which runs via Pipidinny Swamp to within 200 metres (656 ft) of the beach. The Alkimos wreck can be viewed from the nearby coastline, where almost untouched beaches are accessible by sandtrack but a paved road is currently under construction. The suburb offers a wide array of native scrubland, woodland and heath, varying in condition from excellent to completely degraded, and including Xanthorrhoea preissii (commonly known as "black boys"), banksia, sheoak and Nuytsia floribunda. Some degradation has occurred due to uncontrolled vehicular access, clearing for stock grazing, fire and rabbits.

In 2008, Marmion Avenue was extended through the suburb, which had previously been unserviced by the road network. On 14 December 2008, the 490 and 491 Transperth service between Butler train station, Two Rocks and Yanchep. The 490 was rerouted from Wanneroo Road to Marmion Avenue through the middle of Eglinton, operated by Transdev Perth.

All content from Kiddle encyclopedia articles (including the article images and facts) can be freely used under Attribution-ShareAlike license, unless stated otherwise. Cite this article:
Eglinton, Western Australia Facts for Kids. Kiddle Encyclopedia.